This painting was not on the street, but it was spray painted on an inside wall at the Collective at 601 Central Ave. St Pete, and clearly visible from the street. Part of a show titled No Thank you, it depicted a jubilant Martin Luther King in a KKK uniform, pulling off his peaked hat, revealing himself. To the right, a burning cross. An initially startling melding of two diametrically opposed icons.

The artist, Allen Leper Hampton, explained to me in person today, as he prepared to and later rolled white paint over his creation, that the juxtaposition of disparate symbols was, like the title of the show, a way of defusing the power of the racist organization by taking back its visual meme. 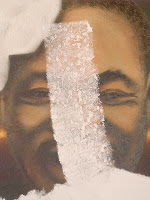 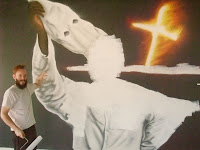 The power of  the tectonics between iconography (what was depicted), iconology (the ideas behind it), and ambient cultural climate came to an explosive head today. Gary, the building's landlord, contacted Sean Williams and Mark Wior at Collective and threatened not to renew their lease unless the painting was covered over in white.


It was by sheer coincidence that I happened by as Allen assembled the drop cloth, roller, tray with white paint, and the roller. The atmosphere was thick with the unreal oppressive aura of censorship.


Rasta, AKA Geary Taylor, who owns One of One Customs and a 2nd shop on the 600 block came in.
He acknowledged that he had talked with the landlord after an undisclosed amount of unnamed people happened by his shop to complain about the painting. Rasta said one person told him someone had been hired to paint over Hampton's mural during the opening, but he had not acted. Allegedly a second source told Rasta that bricks (readily available from street repairs at he corner of Central Ave and 6th Street) would be thrown through the Collective's windows. 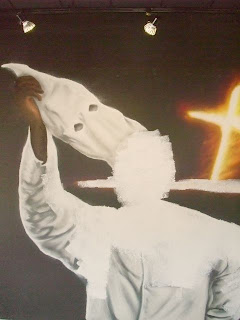 Rasta said he knew but would not name these sources. On opening night, nothing happened to the windows or the painting. Hampton very carefully explained to Rasta the idea behind the painting, which is exemplified in the title of the show, where a negative word is paired with two positive ones. A new synthesis via the fusion of opposites. 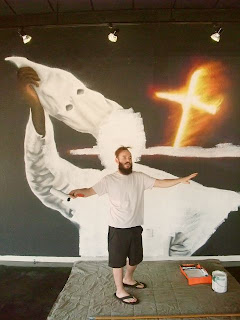 Rasta did not appear completely convinced by the painter's explanations, but by the time he left, looked a lot calmer and shook hands with Hampton, Alex, Sean, and me while smiling.

White paint from the roller began covering the mural. Allen Hampton said to me that the mural itself means nothing, that the idea behind it is what matters. There was talk of trying to get on the WMNF show Art in Your Ear to talk about this as the figure was increasingly blanked out. 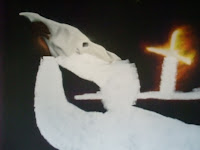 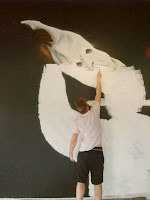 It is a significant moment. I photograph assiduously while listening and taking it all in. There is something poetic, terrible and noir about all this. It is one thing when illegal street art is covered, but this was indoors. Allen seems to take it in stride as he covers the familiar peaked hat, then the burning cross.

Allen Leper Hampton tried to address the problem, his main concern was to reach people and get them talking. In that, he has succeeded. Context matters. Mindy Solomon faced a similar problem with one of her shows themed around sex. She ended up covering her windows with bubble wrap to make the gallery contents invisible from the street. 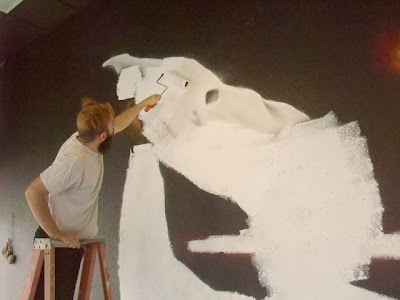