For the group show Mixed Bag, curator Chad Mize brought in local artists Daniel Mrgan, Coralette Damme, Robert Phelps, Dan Lasata, Phillip Clark, Adam T, Stephen Palladino, Laura Spencer, and as is the custom in Saint Petersburg, himself. Each artist had a cluster of works in a section of the gallery's walls.

In the middle of the space there was a little platform on which lay rows of paper bags designated with a few price levels, from $20 to maybe $75. These bags were closed, and had encryption that Chad Mize could decipher and tell whose art lay within. The mystery of these brown bag specials had a curiously strong pull. Buying art sight unseen is uncommon, but most people love a surprise, myself included. I just commissioned a piece from an artist with only one stipulation (an animal in the x-ray style) and have zero idea what to expect (besides excellence). After watching and photographing the effervescent Amy Marshall buy and open a bag that had two framed, no less, small works by Dan Lasata,  a little waffling of my own and a bag ound its way into my hands. My wife got Chad to find her a Coralette bag! 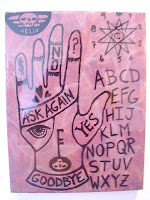 Coralette, like most of the artists, brought a mixed bag to show. Her teutonic, totemic animal/human figures, ghostly, floating in undefined backgrounds, looking unresolved or in transition. Their animal and human natures simultaneously in synergy and conflict.
There were works alluding to Ouija boards and this intensely personal work on the right superficially about phrenology and/or palmistry.

(Full Disclosure: I own several of her works.)


Daniel Mrgan's assortment, seen above, involved a good cross-section of his work He has a way of fusing folk techniques and symbols with leading edge thinking and vision in a highly evolved and distinctive personal style.

Near the front of the gallery was the work of Laura Spencer's cluster of work. Drawings, watercolors and more, mostly small works. Self-portraits, including nude ones attached to notes for a significant other to do household tasks. This was an installation and a shrine of sorts to her work. I was particularly fascinated by the many sketchbooks Laura had out on a table for anyone to see. This is a rare opportunity in the art world.

One of the surprises of the show was the several landscapes shown by Laura Spencer. They were quite good.

We waited to open our (mixed) bags until coming home. It was like an early Christmas. I got work by Robert Phelps, two prints, one GI Joe comic book in mint condition, and enough Tootsie Rolls to feed a small town. My wife got the art deal of the year with several prints, a framed drawing and much more.

Congratulations to all the artists and Chad Mize for a fun show.