Pangea Project No.25: In the Noise Underground Concert in the Warehouse District

Noise music involves using noise and riffing musically to it, or vice versa. It isn't new. In historical terms it began with the Italian Futurists in theory, with the first concert performed publicly in 1913, the Dadaists did their own form of it in 1917. The tradition cascaded into the present through many top musicians and composers, people like John Cage, the Beatles (Revolver, the last song), Jimi Hendrix, and too many others to mention here.

In a roomy space in the Warehouse Art District (WAD) musicians gathered to play. The amount of talent that pooled there was radiant. Creative power surges synchronized the spirits in the room and more. The level of energy, skill, intelligence and expression at Pangea Project No.25 was impressive.


This time I went into trance witness mode and just took pictures. Here's a selection...

On the left is a picture of the gallery section of the venue. The featured artist was Brad Kokay, who had his Xerox collages on exhibit, and later did some live collaging to the music in the concert hall. 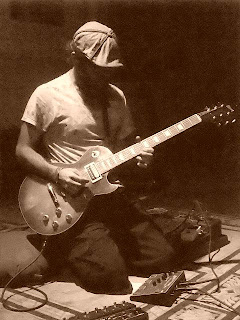 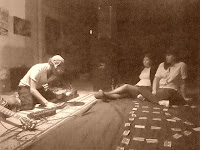 
There is a point where signal and noise cross, a still moment where they are equal. The mind, unfettered from the categories, takes flight, if only for an instant. 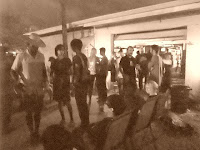 Nequam Solitus's performance was as impressive visually as it was aurally. Wearing an Iron alien-looking mask, he destroyed several objects making noise to music.


Congratulations to all the musicians, Jesse & Trey and the crew for an intense show.