Coralette Damme is no stranger to these pages. Her output is considerable, varied, and consistent in its quality. Themes vary but are well-integrated and focused on nature and Teutonic myth, specially animal totems. At First Night 2012, Coralette crowdsourced funding through Kickstarter and did one of the PODS installations [Link]. It was a departure in her work in a relevant way to the Think Big show. The size of the works was a significant shift.

The work is larger, but Think Big goes well beyond size. There's a trio of 24x30 inch limited-edition screen prints themed around palmistry, phrenology and astrology, ways in which people tried to understand and develop dialogs about personality, individuation and identity.This is by no means a clean break with earlier work. Evolution, expansion and continuity come to mind. In the print shown at left, we do not see a generic hand, but a specific one. Things like the lines and energy centers are rendered visible, with some extending beyond the physicality of the hand. The visual metaphysical is a conceptual space the artist is fluent in. 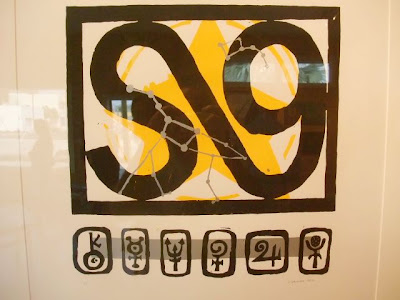 Coralette has been working with smaller-sized (8x10) graphics for a long time. [Disclosure time: I own a few] Astrology is represented by a lyrically mysterious image shown at left (sorry about the reflections). In the main rectangle is (caution: I am not well-schooled in this) what might be the symbol  for Leo superimposed on a golden star with two spindly forms over everything. On the bottom row, the symbols left to right, are: 1) Chiron, the Centaur known for being intelligent, civilized, a teacher and healer.
2) Mercury, the Divine Messenger, Magus, Ruler of Communication. 3) Neptunus, linked to idealism, compassion, illusion, confusion and deception. Also governs places that are isolated from society. 4) Ceres, fecundity of the womb and earth, Mother, Virgin, Nurturer, Nature, Provider and Single Mother. 5) Jupiter,  growth, protector, guardian, good fortune, distances, travel, higher learning, freedom an exploration. 6) Pluto, underworld, wealth, destruction and renewal, spirit over mind, transcending matter.

This is not exactly a Briggs Myers test result, but an autobiographical personality inventory. Remember the spindly figures? They are the constellations of Ursa Major and Ursa Minor. Known for thousands of years, in the Greek myth, Callisto in bear form is almost shot by her son Arcas while hunting, and Zeus turns them into stars to avert the killing. They chase each other, circling the Pole.

There are also larger paintings by Ms. Damme. Some of these are in her signature rich, pungent, glowing, dense colors. These are amongst my personal favorites of her work. The iconic "Dream City", represented at left, is an ideal, a love poem to the spirit of Berlin.


Here is a quartet of the "Phrenology" print, with Coralette, who chose to pose herself into the work as her portrait for this review. She says in her artist's statement that art is used to understand the personality of the artist, by the artist and viewer. I would add that this power of art as a portal is also used by the viewer to get a glimmer of understanding about themselves.

Congratulations to Coralette for her daring evolutionary leap and an illuminating, unusually strong show, and to Rob Davidson for hosting it.

PS. Rob Davidson Fine Arts sells a variety of fine art by local artists, vintage rock concert posters and the works being shown. They are used by top galleries and artists for their framing, photographic prints, and giclee' prints.