There's two Floridas: One is the interior, with theme parks, cattle, small towns and two-lane roads crisscrossing in between I-4 and the Turnpike. The other is what fuels the dream of so many to move here: The water, coastline and particularly, the beach. This is the theme of Donna Gordon Gallery & Studio's (DGGS) current show, so much so she named it thrice.Showing is work by  Margaret Bayalis, Mary Grieco, Gaston (Buddy) Locklear, Bruce Norris, Pam Moody, Ann Sklar, and Curtis Sneary.

The idea of beach can be generic, as in the dreamy mental images we carry of "beach", then we have very specific beaches, the ones we personally experienced and remember in our lives and what we were doing there, when -- and with whom.

"Summer Rain", by Mary Grieco, distills the beach idea by paring it down to a concept borne by the title, and formally, by the signifiers of the two beach chairs. While the rain is there, it's more implied than realistically depicted. It almost suggests the passage of time, as does the positioning of the chairs. The one in front, inviting, recent, as if you just got up from it, and the other receding, more in the past. Identical, yet different. On the right, we see the same strategy using the beach chair, and a very conceptualized, nearly abstracted idea for the "High Tide". Ms. Grieco is dealing with the rythms and cycles of life
in these paintings.


Pam Moody's "Green Sea Turtle" on the left,  is a beautiful hand-built ceramic piece that captures the complex and radiant symmetries in the turtle's shell. These turtles, once thriving, are now endangered and vanishing from our beaches. She continues her emphasis on natural figures with "It's a Moray", a ceramic of this fascinating and fear-inspiring creature. In the photo, it's mirrored , so you can see a front and side views. 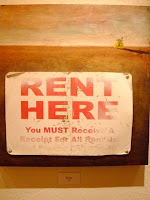 Gaston Locklear's "Rent Here", on the right, is the combination of a sign over a painted image of the beach. It's something a lot of us have faced, the sign for the rental chairs, umbrellas, cabanas, etc. In the background, an empty beach. Looks line dawn, note the long shadow cast by the lifeguard's station.

Ann Sklar is a plein-air painter in an Impressionist style. Some of her work is much more realistic than this, but I notice Donna Gordon is opening up on these things. This one is a near-abstract, yet the lyrical feel, idea and dream of beach comes through.

Curtis Sneary is no stranger to DGGS or AT. In "Mother, Sun, Sunset", we see two reoccurring figures in his work, his wife and son lounging at the waters' edge on the beach at sunset. The title infers that his son is the sun of his life. It is an idyllic moment, the kind most Floridians and tourists have experienced.

"Beach Umbrellas", by Margaret Bayalis is very much a realistic, you-are-there view of the beach, with very good color modulations. The composition is elegant and deftly handles a lot of elements. What is shown mirrors the viewer's point of view.

Congratulations to all the artists and Donna Gordon for a good Floridian-themed show.
Posted by Luis at 5:32 AM