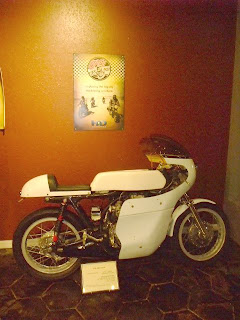 Disclaimer: This isn't about art, but it was held in a gallery (which once held a bong show, believe it or not), and people loved it, so I'm including it here as a kind of fringe event. This may have been a vanity show. The Louvre has had a Formula 1 car on its walls. This is hardly the same thing, but I'll play along and stray for a moment.

On the left is a CB 350 Cafe Racer. What's a cafe racer? In between the intellectual/Left Bank era of cafes and the laptop, macho types created slick, fast rides like this one. Now and then, an actual (illegal) street race ensued, though most of it was about coolness. This is a classic example of the breed.


In these bikes one sees the same pared-down designs, sleek, redone gas tanks, race seats, pipes, etc. The race bikes are far more spartan/functional than the cafe racers, which have style. 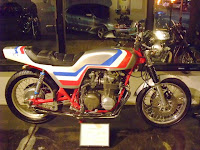 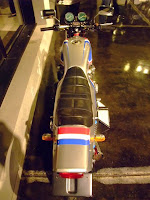 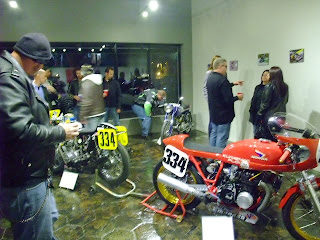 Congratulations to Scott Turner and Collective Tattoo for an unusual show.