Dan Painter's worked for almost a decade, showing his art to a few select people. I was lucky to be one of them, and featured a short article on his work (after being sworn to secrecy on a few things) here. I suggested to Dan that he ought to consider putting on art parties. His place is far bigger and more interesting than most doing this, and his art is like no other. Dan has done just that, opened his doors, and put on a great art party, and it was a success.
His work shows influences from airplane nose art, 50's cheesecake, California hot rod scene, low-brow, all wrapped up in a highly personalized, sexualized style. The work on the left is about 7 ft tall.

His series of "Trophies" of female figure sculptures done in fiberglass (I think) can be seen in the photo at left. Some are very specific animals,. others are entirely mythical. Most are close to life-size. This is outsider art at its best.

Here's a closer view of some of the trophy-series sculptures. 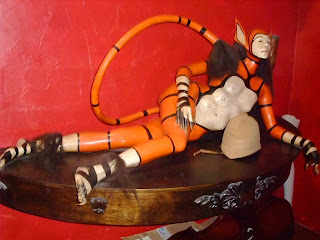 On the left is another life-sized mythical female figure, with multiple breasts (reminiscent of a Greek Goddess) similar to a female dog. Look at the fairie ears. The face is specific, as is the expression, and it appears in other works by Painter.


There's much more work, but I'll save that for Dan's next party. Congratulations to Dan Painter for opening his doors and sharing his extraordinary work with the community. This party wasn't advertised, but if you meander around the scene, the next one won't be hard to find.