As promised, things are rapidly evolving at DMG. The most notable change this time was the show, "Distant Visions, a Look at Glass from Far Away", was curated by Jorge Vidal and Mary Childs of Childs Art Studio. Their efforts resulted in a much more coherent and synergized presentation than in recent memory. The work of Alex Fekete, Holly Grace, Dorothy Hafner, Gabriele Kustner, Charlie Miner, Mary Mullaney, Ralph Mossman, David Patchen, Josh Simpson, Martin Rosol, Peter Wright, Massimiliano Schivon and the host, Duncan McClellan were featured.

Also new to this show was a brace of beautiful, lightly clad, elegant models who managed to inspire many smiles. One never knows what one will find at DMG. 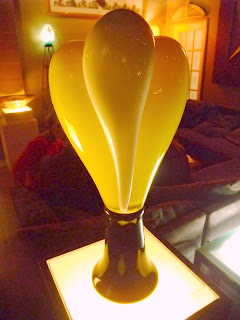 The work of Christian Zvonik, who was reviewed here recently, was in the Dec Party review. I wrote: "He is a mixed media sculptor that came here from Seattle. The work is themed around natural forms, beautifully stylized to their core elements".We can see that in the sculpture at left, a highly stylized and gorgeous avian form.
[Link]


Here's two works by Josh Simpson, both dazzling and very decorative. On the left a vase, and on the right a 2ft diameter plate. There was Zodiacal symbology in them.


I had the pleasure of talking at length with Peter Wright, one of the featured artists, and his wife. In this photo one can see three glass representations (though somewhat abstracted) of pitcher plants in varying colors. These things were light, airy feeling, and looked as if they dance when you're not looking. I met them the night before at the Fire Station #3 show.


On the left is another work by Peter Wright. This one is about 2 ft high, and is blown glass made into an abstracted American Indian ladder. This is a spiritual analog of a literal ladder. The crackle wood-like texture on this is unbelievably delicate.


This on the left is a fused Irish glass plate by Karl Harron. The subtle precise lines combined with the slight texture of the surface of the glass play perfectly with the bumpy organic-looking center of the plate. 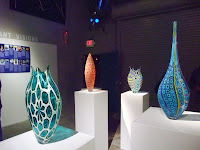 This is a cluster of work, most, by David Patchen. On the right is a close-up of the base of the vase at the front left in the photo on the left to illustrate the entrancing pattern on its surface.

On the left is "Digital C #100 - Painted Desert",  by Ralph Mossman. Having been to the Painted Desert, it is easy to see the connection with this blown glass piece. It carries the colors well.

Congratulations to all the artists and models, to Jorge Vidal and Mary Childs for the curating, the employees at DMG and Duncan for a memorable show, and for raising the bar for the gallery.