The Hoffman-Porges gallery has been open in its second incarnation since September 2011 [Link]. Adjacent to the gallery was a 2nd lot that was filled with debris from the collapse of the roof that had been there, and other assorted trash. Samantha Churchill, who has been reviewed here [Link], [Link], [Link], cleared out many tons of garbage from the lot, revealing a concrete slab, and a courtyard rich in ruin-porn chic, perfect for holding events of all kinds. I spoke at length with Ms, Churchill, who was thematically attired in an orange & tiger-striped dress, about the clean-out, the idea for a Big Cat Rescue fundraiser, and more.This was done in conjunction with the YAA (Ybor Artists Association). I spoke with Jason Shiver and the YAA member in charge of placing artworks in businesses. She currently has over 300 works placed. YAA continues to amaze with its multifaceted expansion and growth.


Inside the gallery, there were works on silent auction on the big tables, by the eastern wall next to the tables, for prospective bidders to submit their bids. I was there early, and left early, but there was a good number of people meandering and writing in their bids. The artwork was Cat-centric, with assorted members of the genus Felidae ranging from house cats to snow leopards and everything in between. 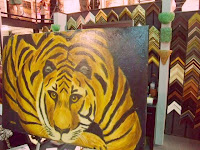 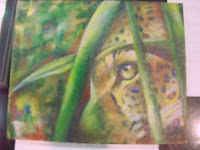 Here are two examples of the kinds of work that were auctioned off. They varied greatly in size, too.

This gives some idea of the ground floor space, the tables, works and the attendance (remember, I was there early, it got more crowded  and was going strong by the time I had to leave. This was taken from the catwalk (how appropriate!) towards the front door. 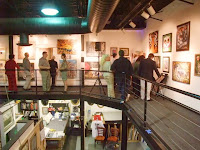 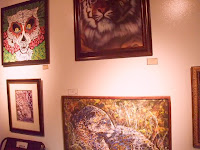 On the right, one can see about 1/4th of the catwalk, and the cat-themed art that was being auctioned up there. Lots of variety. 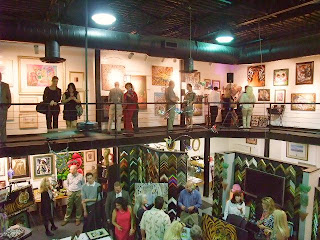 I ran into Tatyana Igumnova Hankinson, who told me she and her husband are moving to Alabama soon because of a transfer. She is one of the best colorists in the area, doing both plein air landscapes and architecturals/city scenes. Our loss is Alabama's gain. Hopefully, we will be hearing from her in this space soon.

Congratulations to Samantha Churchill for her Herculean efforts, to all the artists for the work, the attendees for their imvolvement and purchases, and to Jill and the General for a fine continuing effort in what is one of the premier art spaces in Tampa.