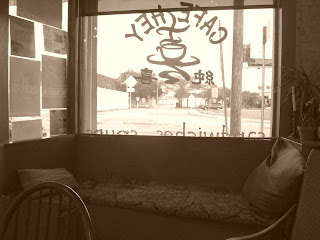 Cafe Hey [Link] is a pearl tucked just north of the Insterstate at 1540 N. Franklin St. On Thursday evenings Open Mic night is held. It is run beautifully by poetess Nyssa Hanger and her Doorstop Productions outfit [Link] and MC'd by Cole Bellamy. Anyone can walk in, sign the sheet and perform. People tell stories, do stand-up comedy, sing, play music, and read poetry. Viewers take all this in while sipping coffees and enjoying excellent soups, baked goodies, sandwiches and more. Admission is free, though donations are appreciated.

Manette warmed up the crowd with a heartwarming sing-along of the song Frere Jacques [Link]. 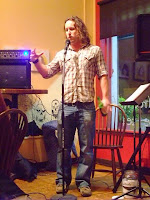 Law Smith did his self-mocking, cosmopolitan alternative comedy. A bit on Domino's $5 pizza was ironic and really funny. There was another on how dogs own us, including picking up their poop, Valentine's Day, and more. His pacing and delivery are quite good. 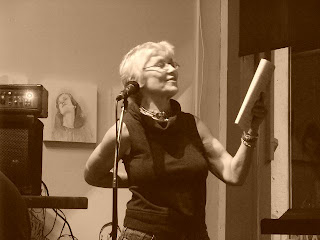 Angel Wings, dealing with the Ego, Human potential and its development, and other empowering themes read enthusiastically and expressively made Elizabeth's performance endearing and memorable. 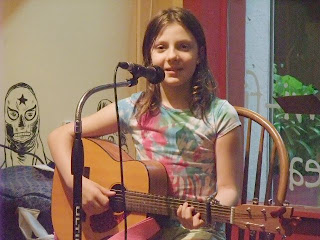 There's something about Riva. Her courage and determination are something to behold. She sang her moving rendition of Leonard Cohen's haunting "Halleluja" [Link] in a way that transcended her years. Afterwards, the Beatle's  Yellow Submarine. 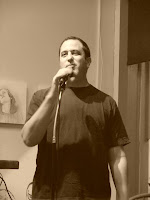 Tony did stand-up about day jobs, getting up early, taking breaks, smoking breaks, birthday cakes, and how to control traffic with snipers firing tickets onto cars. He does a great straight-man routine. 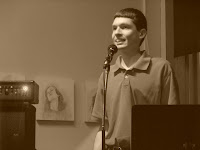 Riva had challenged Brian to do a rendition of Lady Gaga's Pokerface. It was one of the many highlights of the evening, bringing the house down, only to be followed by a brilliant and hilarious PG-13 song about love and pants. 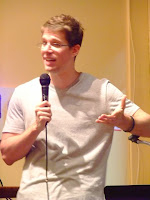 John Jacobs did a routine about shopping on Craigslist, Ikea and assembling their furniture, their .50 hot dogs, being high and shopping for candy. Optimism and gambling, too. 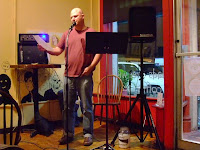 Steven read from his 100-item bucket list, things like "seeing a ghost, drinking from Angel Falls, witness someone dying, doing a poetry book. and ayahuasca". He also read some delightfully surreal poetry. 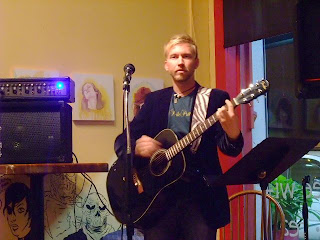 Mr. Matthew played Bush's "Glycerine" beautifully, then a moving song of his own. 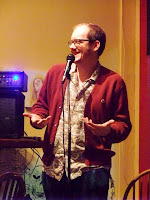 Master of Ceremonies Cole Bellamy did the break with a ironic and funny routine on unused love. 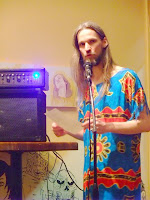 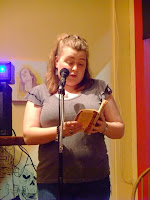 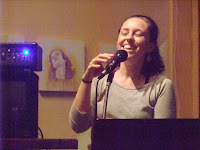 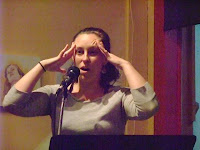 Nyssa read a fascinating passage on the limits of the body, an insight into the nexus where inner cosmology extends into the outer.  Speaking of the body, Nyssa communicates as much with hers as she does with the spoken word. 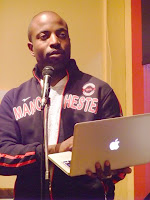 Eternal read a poem against depersonalization, the negative effects of technology, consumerism, self-questioning, the worship of money, all with a patriotic ending. 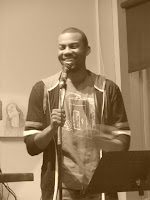 J.B. Ball did an apparently autobiographical piece on former athletes who didn't make the big leagues, with plenty of non-PC allusions. 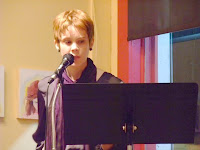 Alex read one of her intensely beautiful, surreal poems, this one about a man with three legs. 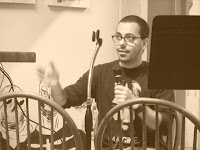 Joseph did some beautiful musical compositions on the keyboard, and a very personal account of his days wrestling with alcoholism, ending with a dream about a mysterious entity that lead to the realization that "It was nothing but me".


Treat yourself to open mic night on thursdays (7-9 PM) at Cafe hey. This is fantastic stuff going on there, uplifting, real, sensuous, and intensely human. There's an unusual and delicate balance at play here. Think of it as taking your soul to the laundry.