Lost Moments, The Art that never was @ Silver Meteor Gallery

Bipolar disorder [Link] is common nowadays. Almost all of us know at least one friend or family member who has it. Many have attempted or succeeded in committing suicide in the midst of bipolar depression. April Bender, who suffers from bipolar disorder, had the idea of an exhibit about artists who suicided in a bout of bipolar depression and what was lost. She designed this exhibit, including the artists to be portrayed, the sets, clothing and props, chose the actors that portrayed the artists and directed them She also directed during the photography shoots. Plus she acted as Penelope Delta.

There were two photographers involved, Joshua Hamel, and Melissa Wilson, who is responsible for most of the photography.


A lot of the pictures are of several portraits collaged, like this one of Penelope Delta, portrayed by April Bender, and photographed by Melissa Wilson. Each of these was accompanied by one sheet of biographical text about the person, their accomplishments, depression and their suicide. The portraits are about the moments preceding the suicide. Some are more graphic than others, all are intense.
Penelope was an author who ended her life by taking poison.


Simone Mareuill, a French actress who was in Un Chien Andalou, committed suicide by dousing herself in gasoline and lighting a match. She is portrayed here by Megan Perry, whom I interviewed on opening night. I asked her about the portrayal of Simone and she told me as April poured water on her head, she got deeper into the character, thinking about what must have gone through her head at that moment, and a crushing sense of loneliness befell her, tears flowed and Melissa got the pictures. This type of experience was reported by another actor as well. When they got in character, the terrible depression was almost too much to bear -- even for a short time. 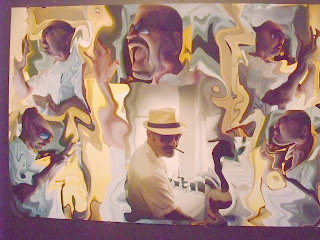 On the left is actor Kerry Glamsch acting as Hunter S. Thompson, who suffered from bipolar depression and ended his life via gunshot. There were many portraits, all about extraordinarily gifted individuals whose lives and work were cut short by their depression. April told me that we've cured smallpox and other diseases, and we can do the same with bipolar depression. She's right, and this show, in a small but significant way, uses the power of art to bring us closer to a better future.


It was all done to benefit the Depression Bipolar Support Alliance of Tampa Bay, Inc., and those who are helped by this organization.

The show was held at the Silver Meteor Gallery, a theater that multitasks in many forms, run by Michael Murphy. It is located at 2213 E. 6th Ave Tampa Fl.

Congratulations to April, Melissa and all the actors, to Michael Murphy and Silver Meteor Gallery for a very unusual and memorable show.