Things not Seen Before @ Tempus

"There is no such thing as an empty space or an empty time. There is always something to see, something to hear. In fact, try as we may to make a silence, we cannot."


Things Not Seen Before, a tribute to American composer John Cage on the centennial of his birthday, was a daring show/event put on by guest curator Jade Dellinger at Tempus Projects. Dellinger, who is an author and freelance curator, is well-known for being ahead of the curve and being able to tap into difficult-to-grasp things and creative people  on a regular basis. 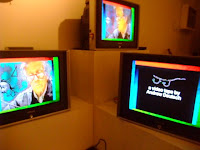 On the left is Andrew Deutsch's "John Cage Empty Words IV with Piano", a three-monitor video installation with Cage's voice and piano played by Yvar Mikhashoff. Playing simultaneously, falling in and out of phase, it was impossible to grasp this analytically, but it was pure musical, audio & visual poetry.


John Cage was major American composer, philosopher, theorist, significant modern dance figure  and more. His ideas expanded and redefined the lexicon of music and art in ways that are leading edge to this day. One example is his 4'33" from 1952. Three movements where nothing is played, but the ambient sounds of the place where it is 'performed' become the composition. He was influenced by Hinduism, Zen Buddhism, the I Ching, and aleatoric music, which allows chance to enter in the same way that chance plays a significant role in the divination method of the I Ching.

This is a a monotype with imprints of paint-soaked cords and watercolor on paper done during a 2-day residency in Nov 1980. The work was done very intuitively and with some decisions made via consulting the I Ching. The strings were dropped (a la DuChamp) onto the paper. Even the stepladder from which the strings were dropped was selected by Cage.

USF Music School Musicians played, interpreting the visual pieces in the show. While the performance may have sounded improvised, it was actually carefully rehearsed. The combination was far greater than the sum of its parts, amounting to a Neo Modern "happening" [Link].

Milan Knizak,  a complex and multifaceted Czech Fluxus artist, created "Double Music". On the left is pictured one of two panels of records that were modified, taped over, painted, mutilated, etc, creating a new kind of music. Each of these records is an artwork unto themselves.

Theo Wujcik's site-specific "John Cage", done on mylar, functioned as a curtain/entryway for the exhibit. Cage's visage as a portal to and from the exhibit. 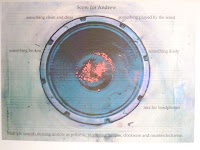 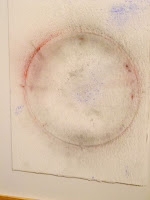 On the left is Stephen Vitiello's "Score for Andrew (version I)", an inkjet print of a speaker with various notations around it, for music to be played. On the right, by the same artist, is "LFO, Speaker Drawing", graphite and pigment on paper.

On the left is one of three works by Cage in this show from "The Mushroom Book", 1972. These are lithographs, trial proofs outside the edition. About these, Cage said that the viewer was encouraged to hunt for a remark in these works, "as though he were hunting for a mushroom in the forest". 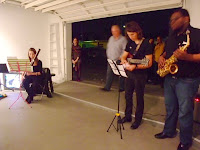 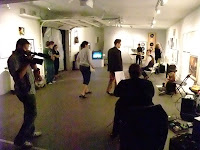 USF musicians, playing at the event, interpreting the visual works.

Congratulations to all the artists, the USF Music School Musicians, Jade Dellinger, Tracy Midulla Reller and Tempus Projects for a memorable event.