The Morean has stepepped up and seized the cultural moment with a daring exhibit that is long overdue in this area. Tes One, BASK, Akut, Center, Dolla, Allen Leper Hamilton, Joey Clay, Laura Spencer, Anna Paul, Stephen Palladino, Christian Thomas, Nonstop, Wes Roos, Jansen Smith, and Terribly Odd are being exhibited. The show was curated by Amanda Moore and Tes One.
.
Some of the artists are, as the MAC describes them, "active", meaning they are currently doing graffiti. Others are in transition, between graffiti and conventionally-exhibited legal art, and a few have left the fat caps behind and moved on. Some are simply appropriating from graffiti.


In some cases the artists have taken the techniques of graffiti to fine art. Alan Leper Hampton used spray cans to do a large mural of a woman's face, about 3 m. tall. Alan has an MFA from USF and has exhibited in many venues nationally. His works simultaneously focuses on the importance and uselessness of art.


I would be very interested to see street art by Laura Spencer. This is her version of "Balshazzar's Feast", the title links it referentially to the original, which was painted by Rembrandt. In the Rembrandt, shown below left, the message on the wall was in Hebrew. In Spencer's, it's in English, and the message on the wall (sans mysterious hand) is "Praise the Lowbrow". It is also in a faux, unhinged, three-panel altarpiece format. In the story in the book of Daniel, King Balshazzar desecrates the Holy Vessels of the enslaved Israelites when the mysterious hand appears and leaves the prophecy on the wall spelling doom for the King. Laura has three golden triangles on the panel on the right, with a crow perched on the lowest one. There is a crumpled can, note or sketchbooks. In the panel on the left, there's more triangles, a pot pipe, ashtray and more. In the middle panel, a skull with a Chief's headdress, a bowl running over with fruit, an iPod, a watch and more. Is the writing (graffiti) on the wall aimed at fine art?

Ales Bask Hostomsky, an emigre from Czekoslovakia, literally made a name for himself with the ubiquitous "BASK in your thought crime" stickers, which can still be seen plastered on traffic light poles on Central Ave. He participated with Tess One on a mural at Zen Glass [Link], and is apparently still active with this large tag put up recently [Link]. Bask is a painter who works with salvaged materials, as we see here, and tension, both conceptual and formal. He adopts tropes and the signifiers of various techniques like a chameleon. The American flag is a new addition to the Thought Crimes series, as is the red, white and blue. The artist seems to be imparting a sense of legitimacy and an American tradition spin to graffiti in this work, which has more than a touch of recontextualized folk art to it. 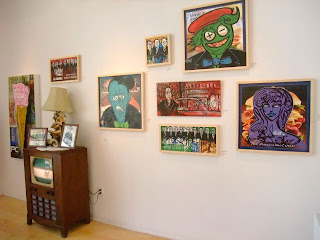 Steven Palladino is well-known in the Bay Area. His distinct style, very similar to drawing with a paint brush, often using continuous lines is present in some of his works in this show. He does a lot of grim-faced, old, white guys in suits that remind me of stale power structures and media characters. Steven also blends styles from different times to great advantage. The old TV console in the lower left in the picture on left was showing a video of the artist at work, giving some idea of the dynamics of the process to viewers. There was a mixed-media sculptural piece by Palladino, a section of a refrigerator titled "Paint or Die (Who Needs Food?). This is an earnest hommage to the graffiti lifestyle, a conceptual piece with a lot of subtle touches in it. There are allusions to taggers, their sacrifices 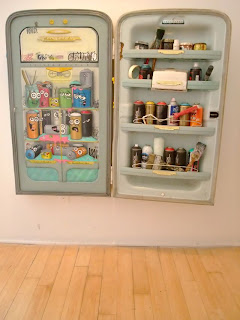 and more. This is the kind of work that deserves extended attention and contemplative observation. At one time, it is a time capsule, sarcophagus and monument to graffiti and the artists who risk arrest, fines and jail/prison time for their art. 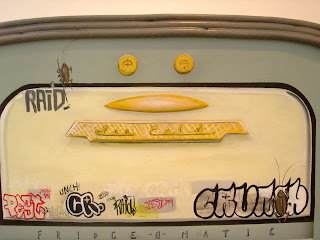 On the left is a close-up of the interior of the fridge, perhaps the upper 1/4th freezer section. 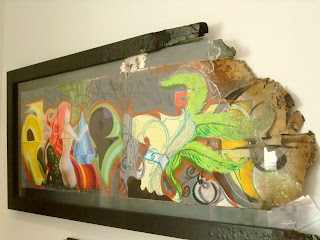 Christian Thomas's "Gnarlyfe", in part, stems directly from an existing mural recently completed. That's the part on the left half. It is photographically collaged with bits from a mural behind a house (if memory serves), with a hole left by a .357 bullet (the whiteish part along the top edge). There's a lot about materialism in this work. A red-headed nude holds onto a blue diamond, a face makes a gagging gesture behind it. A stack of flesh-colored money peels, with pot leaves behind it. 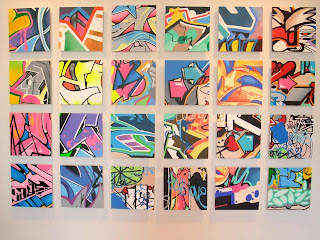 Anna Paul is a student at Ringling who openly admits to never having done graffiti. This has not stopped her from being inspired by and adopting the formal elements of writing into her abstract work. 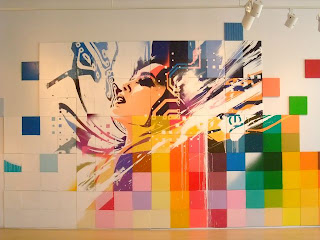 "Watercolors", by Tes One was the centerpiece of the show. A woman's face emerges out of a pixilated, color-tiled section in the lower right of the painting. There are sub-pixels in white, and blown-up microcircuitry around the face.


Graffiti has been around a long time. It may have been the first art form. Probably every major metropolitan area in the USA has shown graffiti artists and/or actual graffiti year ago. Congratulations to all the artists and to the Morean Arts Center for making the leap. Thank you.

We've been waiting for you.