In Tampa, the Cuban Sandwich is not a mere morsel for satiating hunger pangs. It is a cultural icon, encoded with history and sociology and one that is elevated to an art form. The Cuban Sandwich Show is coming. I see David Audet in clandestine meetings with artists wearing dark sunglasses, plotting to light our hair on fire with the show, which will be held at HCC Ybor. I'm getting ahead of myself. This event was about finding the best Cuban Sandwich, and not just in Tampa. There was at least one entrant from Miami, and they did well.

In Centennial Park in Ybor, under the roof of the pavillion, heaping plates of Cuban Sandwiches awaited the judges' palates. They were the local cognoscenti, with hard-earned knowledge acquired from downing many a sandwich. David Audet and Steve Otto somehow stood out. They examined the Cubans like a like a CSI investigator, as seen on the pictures on either side of this text. How Otto cold see anything through those glasses in deep shade remains a mystery to this day.

It was a hot morning, but the park was full of people. Tents lined the walkways with arts and crafts with food on the periphery. People ate sitting on the concrete, in the shade provided by the building across the street. 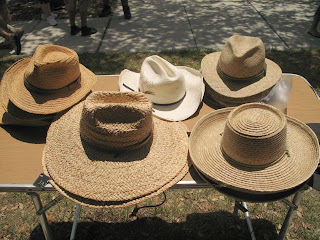 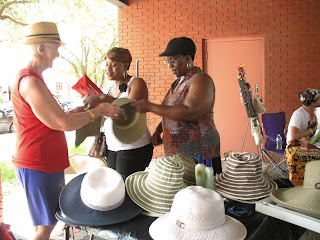 There was a wide variety of goods for sale. On the left is but one example. Below, festival goers making a purchase. 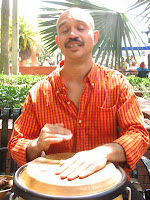 All to the beat of the conga drums. Edgar Santiago was playing them beautifully, lost in his music. He is also a meditation instructor, and can be reached on FB at [Link]. 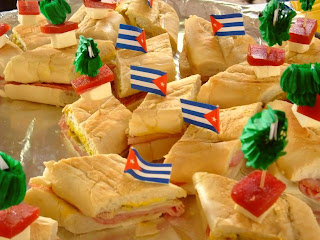 Meanwhile, the judges munched, and the Cuban Sandwiches, all looking their very best, whispered "Escogame".
This was the 3rd-place winning entry from Hialeah. They went over the top, what with guayava y queso pinned to the sandwiches! 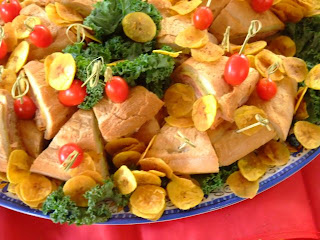 Presentation was important, and the contestants played it well. Here is one of the more natural renditions. 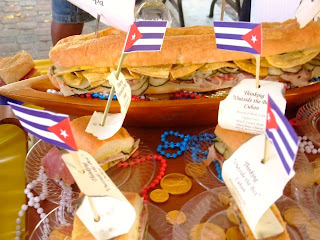 These were in the form of little galleons surrounding the Mother Ship... 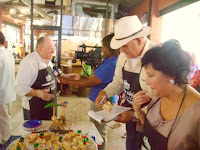 The judges diligently went about their appointed task... The winner was....a food truck. Michells Faedo's On the Go food truck won. Second prize went to the Stone Soup Company on Seventh. Third to The Cuban Guys, a restaurant in Hialeah (far away). 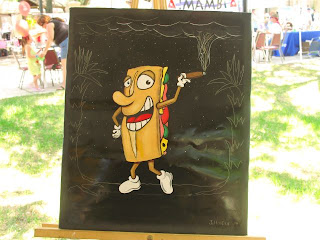 David Audet, one of the judges, had a tent promoting his upcoming Cuban Sandwich show, with a sneak preview of some of the forthcoming art at the exhibit. 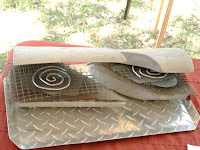 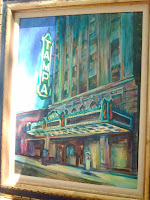 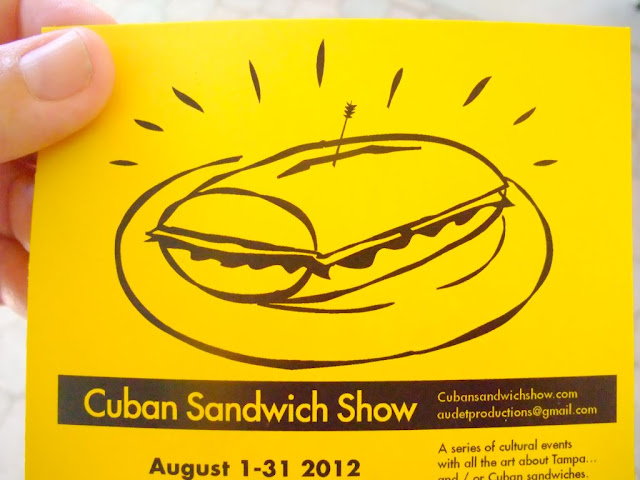 This is one of the great, indigenous art events in Tampa. Treat yourself and your friends.