Community Stepping Stones (CSS) is a non-profit funded by the Hillsborough County Arts Council and University of South Florida. Using art to heal and develop central Tampa youth, CSS works wonders. At the "One Waterway, One Tampa Bay" show at HCC Ybor gallery, I saw the evidence first-hand in the installation and the positive self-images and confident demeanor in the CSS students.

For this project, the students learned about the estuary ecosystems of the area. This is one of the core topics of Sigrid Tidmore, CSS's executive director and watercolor painter of waterside wildlife and its relationship to man. CSS students went on field trips to estuarine environments and gathered trash and plastic bottles others had discarded in these areas, which are critical to the well-being of Tampa Bay, living nurseries where fish, crabs, shrimp and many more creatures can grow in relative safety before entering the bay waters.

The viewer enters the HCC Ybor gallery in a very similar way. Instead of grasses, the vertical forms are over a thousand plastic bottles that  were recovered from the environment, cleaned, sterilized, and threaded with monofilament line and hung from the ceiling in long translucent columns.


The effect transcends the feeling of safety an estuarine resident might feel. The columns remind me of something Antoni Gaudi might have thought of. They rise like bubbles, or three-dimensional stained glass, a metaphor for the aspirations of CSS's students and staffers. I advise anyone visiting this exhibit to linger among the bottles and look around slowly, through them, too.

[This is roughly the amount of bottles people throw away every second in the USA.] 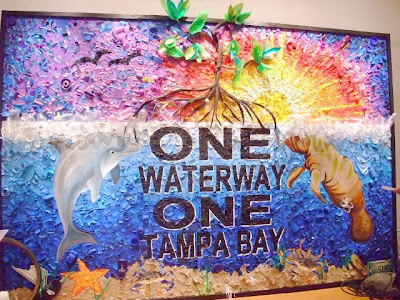 Beyond them lies the 8x12 ft. er...mixed-media mural composed of colored objects also found in the Bay. It carries the title of the show on it, along with a porpoise and a manatee on either side of the lettering. A close-up look at this work reveals it to be a mosaic composed of found trash objects, painted, assembled and recontextualized into a mural that speaks to preservation through what was once pollution.

Congratulations to all the students and CSS staffers for an exhibit & project with real-world functional, personal significance and lyrical metaphorical aspects.