From Wikipedia: "Folk art encompasses art produced from an indigenous culture or by peasants or other laboring tradespeople. In contrast to fine art, folk art is primarily utilitarian and decorative rather than purely aesthetic. Folk Art is characterized by a naive style, in which traditional rules of proportion and perspective are not employed."

Whose traditions, rules, culture, decorations and aesthetic? Other people's. Those outside the dominant culture and art world mainstream. Art is not obedient or subservient, nor does it fit neatly into an egg-crate reality. Folk Art is no exception.


The works in the Sacred Folk exhibit at Gallery 221 was curated by Katherine Gibson from the Jeanine Taylor Folk Art Gallery in Sanford, Florida. [Link]. The gallery specializes in Southern Folk Art, but brings in artists from around the nation for their residency program. Nineteen artists are included in this show.

Three of the paintings on the left seem to be old photographic portraits of men that Butch Anthony has drawn naive-anatomy white skeletal structures over. The one on the left is a more recent color painted portrait of a woman.  Butch, a self-taught painter, lives and works in Seale, Alabama, in an 80-acre compound with his family. He holds his own festival, called the Doo Nanny on this land. He compares it to the Burning Man, except they burn a 100' vagina (!). The Museum of Wonders (in a barn) is there, too. Filmmaker Les Blank has been documenting Butch and his art for some time. That project is still ongoing. In spite of the apparent naivete about the skeletons, Mr. Anthony studied zoology, dropping out of his university studies in his senior year. His skeletal portraits metaphorically bring up the similarities within us, the relativity of individuality. The artist is known for using real bones in his sculptures. Note how the skeletons are individuated. There's nothing generic about the artist or his work. Another thing these skeletons do is to remind the viewer of mortality. If nothing else, these are memento morii. [Link]

Michael Banks grew up in Alabama. Born in a housing project and self-taught, he drew and painted from the time he was a child. When his mother died, he spent four years recovering, honing his art, emerging an artist who found success in galleries and art shows. He paints on upcycled wood board using acrylics and/or enamel with turpentine and tar added. He is considered an outsider Folk Artist who brought in his own aesthetics instead of working in traditional ways.Note the Picassoesque head on the left, with one eye projecting its gaze, and a conceptually similar, though different approach on the eyes of the head on the right. Blue lips, green lips white hair and what appears to be a white mask on the figure on the right. Note the tiny figure standing on the edge of the red eyeglasses. Banks says he has to paint to stay alive spiritually.

Theresa Disney, no relation to Walt, lives in St. Louis and paints every day, reportedly to exhaustion, often in her kitchen. She has a narrative style grounded in play, joy and humor. In "Who Shrunk My Shorts?" The man of steel and Pop icon Superman can deal with anything, but like many men, is stymied by laundry, his shorts having shrunk. His face looks a little distressed. Note the scale of the figure compared with the washing machine. It's a light-hearted, humorous painting with subtle but strong feminist implications. Superman is humbled by a simple domestic task, and we see that Superpowers notwithstanding, he has to do laundry, like the rest of us.

Matt Sesow lost his left arm due to an airplane propeller accident when he was eight years old. It was reattached, but the hand was ultimately lost. He became a computer programmer, began painting to meet people, and worked as a Peace Corps volunteer in the Solomon Islands. He lives in D.C., is a self-taught painter, has made short films, had a solo show at the Corcoran, international shows and is a member of Mensa. Sesow's "Candy" painting in the show fits in the Art Brut category. There's little conventional  arts codification here. It's primarily personal. A grotesque head, but if one gives it time to get over its overwhelming initial effects, one can see unbridled and fierce life energies coming through in a manner remotely similar to that of Francis Bacon.  Sesow is not holding back.

In 1995, three of Mary Proctor's family members died in a trailer fire. While grieving, a voice told her to paint a red door. She did, and it led to a painting career in traditional African American Folk Art themes. Religion, redemption, rebirth, and ritual figure prominently. In the paintings at left, we see two baptisms. Above, Mary Proctor's own baptism, outdoors, in a creek. Lloyd creek, to be precise. The artist is being led to her 2nd, spiritual, birth. Stylized figures in their Sunday best and bright colors celebrate in the waters, other figures hail her. It's not just a spiritual event, but also a social one.

In the lower, "Baptism in a Church" the figures are much more restrained, in vestments and colorful uniforms and neat rows. 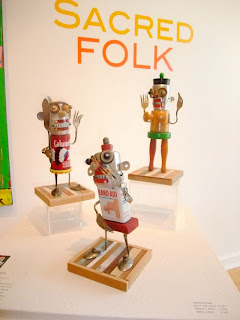 There are many other works in this show, including several sculptural works. One thing that is generally true in art, and more so in the Folk, Outsider, and Brut varieties: Read the biographies of the artists in this show, and you find extraordinary lives, specificity, healing, diversity, twists of fate, chance, great, big, dripping wedges of character -- and the questions of art -- Who are we? Where do we come from? Where are we going? There's plenty of eccentric, highly personalized work that is outside the conventional fine arts box.