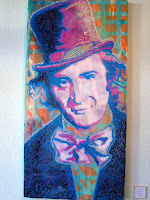 This is a vast theme, and the artists offered a broad variety of approaches. There were cinema icons as in Phillip Clark's "Everlasting". 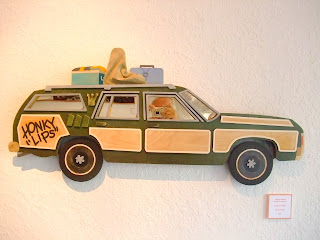 One of curator Chad Mize's works in the show was a cinematic automotive icon, the George Barris designed station wagon that was practically part of the cast in National Lampoon's Vacation. It was titled "Wagon Queen Family Truckster" in the movie and in  Mize's painting, which sports the "Honky Lips" graffiti on its rear fender as did the one in the movie after Mr. Griswold getting lost in a Ghetto. 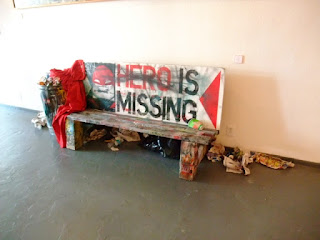 BASK (alias Ales Bask Hostomsky, of Ironman 3 fame) has a mixed media three-piece work done in collaboration with film maker Brian Bourke that involved a bus stop-style bench with street trash-verite around it and a superhero outfit crumpled at one end. The bench reads "HERO (crosssed out) IS MISSING", and there is a picture of the hero's head in the costume. Brian Bourke Filmed people sitting on that bench, cast from friends, cronies and the usual suspect locals. This (as seen on left) has above it a diptych, the left part of which is what appears to be a modified photograph of someone wearing the superhero 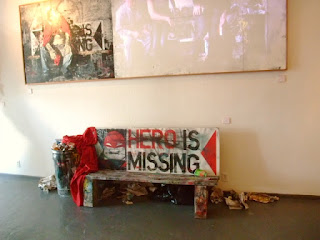 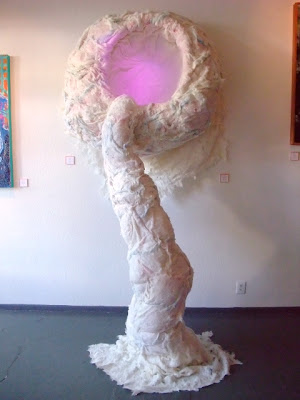 Saori's "Womb" is a mixed media installation/sculpture consisting of a hollow sphere and what looks like white goo (but isn't) spills out of it onto the ground. The sphere resembles the eye and/or a camera obscura with an oculus, from which the stuff spills. The light inside varies from white to blue and pink. This was a collaboration piece with a video projection by Tyler Martinolich Is this a metaphor for the creative process in cinema? 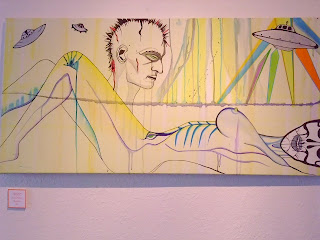 
Congratulations to all the artists, Blue Lucy and Sunscreen Film Festival for a good show.