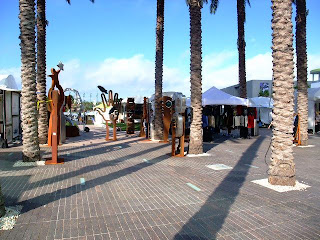 It is best to arrive early. Very early, and walk over to the First Watch restaurant, on 520 N. Tampa Street for a good, hearty breakfast (AT is partial to the Bacado omelette).

The artists whose work I have chosen are not a hierarchical list, but what stood out to me in my quick, early morning sweep of the show. In the pictures, it may look unpopulated, but that's because of the early hours I was there. As I left, it was packed.  Above is a view of the show as it opened. Those are Dale Rogers metal sculptures in the background. His work has been reviewed here before.


Richard Currier's "Amber Dawn" is a Luminist, Turneresque radiant painting. Seen in the tight space of the booth, it is overwhelming in a very good way. Richard is a graduate of Ringling, and has studied his art in various countries in Europe. He also does figurative and still-life painting as well. To see more, [Link]. He is at booth #221.

What you are seeing on the work on the right is movie film. Literally. Rolled, formed, bound, film. The old fashioned stuff. Nancy is one of the most respected and admired artists in the area. This work, like so many of hers, is lyrical and full of grace. Nancy has a degree in cinematography and turned towards working directly with film. This year she has made and brought earrings made in this manner, one of the great bargains of this show for wearable art. The work seems like a metaphor for time, what with the spirals and passing of the film era. [Link]

Duncan McClellan is no stranger to these pages. A prominent glass artist, one of the premier gallerists in the area, and soon to have his own hot shop, Duncan is above all, a community-maker in the arts scene who is making things happen in a difficult economy.  His glass works are beautiful, strong in form and rich in content. [Link]


Geoffrey Aaron Harris digitally paints robots. They are framed by curtains and/or signs that are reminiscent of carnival/fairs art. These robots are like freaks on exhibit, and they are unmistakably like humans. [Link]. 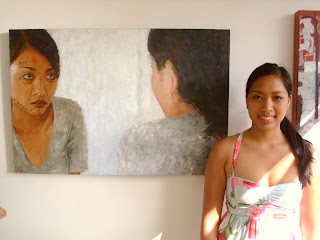 Sara Novio, pictured with her work on the right, is concerned with identity and its geography on our faces and bodies. In the work depicted, a woman (reminding me of the artist, though I did not ask) looks at her own face in the mirror, on which there are plastic surgeon's markings. [Link]


Jessica Stoddard showed a variety of work, all paying close attention to line. Here is a child's pedal tractor, a toy from a bygone era. There are girl's dresses, stollers, and other memory laden forms. [Link].  Booth # 143.

Scott Coulter's landscapes have been reviewed here. I said about this series: "...acrylic landscape paintings that have partitions & sub-frames, sometimes disjointed..."

"The effect is very similar to that of a highly ordered photographic collage, with notable differences, like the shading below some of the subframes gives the illusion of stacking, or 3-D. The eye keeps trying to unify the visual field, which resists its efforts because of the smaller images and individual perspectives within the picture." 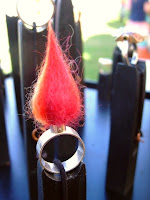 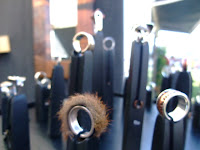 Aaron Sault is a standout creative jeweler pushing the boundaries of design. On the left is an amazing finger ring probably made of silver with a pointed, flame-shaped bit of hair more or less bursting from it. On the right are more rings, including another hairy one. He is in the current jewelry show at Craftsman Gallery. [Link].


Marvin and Wendy Hill produced fabulous water-colored blockprints. Sadly, Marvin passed away, and now Wendy carries on. This is one of the last shows she will be doing before moving sales online. These are formally gorgeous and full of grace, and unusually strong in content. Walking into this tent is like walking into a cathedral. [Link] 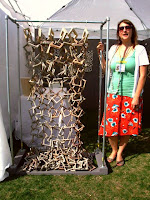 Maria Albornoz is a ceramicist of note in Tampa. Her installation at Sat Creek Artworks last year was one of the best narrative ceramics by a Tampa based artist in a long time. It would stand out in any circle for its brilliance. At Gasparilla, she has brought her vertical integration series, with variants in several sizes. These have their socio-cultural implications about mobility and are beautiful as well. [Link]. Booth # 86. 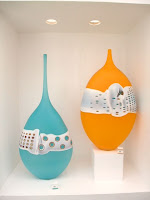 This exquisitely crafted metal and glass piece is titled "Inquisitive". It is by David Royce, of Minneapolis. Note how the bulb at the bottom has crosses on it, the stem between it and the other bulb is bristling with crosses in all directions but a little more spread out, and the top bulb has them too, but less cluttered, distilled. On the right, two other works by Royce. [Link] 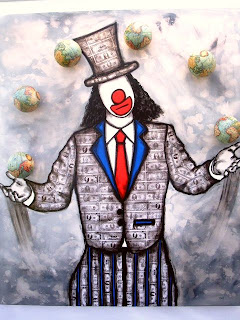 Ernesto Piloto-Marquez raises questions with his paintings. In this one, a facelss clown, dressed in a top hat, red nose, jacket and striped bankers' pants, juggles the earth. Daring, political, and with unbridled passion this kind of energy  typifies his work. A classic image for our age. 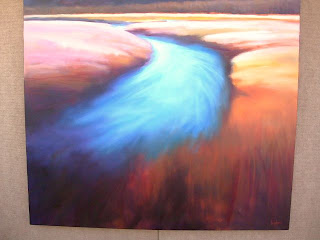 Marla Baguetta's pastel landscapes have an unbelievably luscious sense of color and form. Somewhat abstracted, the eye happily adds its own details and movement to the water. These don't invite you in, more like a child taking your arm, they take you in at a breathless pace. These function at many levels, but I found them as big broadband portals to a calmer, more beautiful world. [Link]


One of the great things about Gasparilla is its ACT gallery. Designed to teach kids about collecting, it was packed with works donated by exhibiting artists, which the kids could buy between $5 and $10. Parents have to stay outside, so the young buyers can go throught the process on their own. Fantastic idea.

On the sound stage, I caught this duet of guitarists singing beautifully. Karen Krajacic and Jill Cowen, of Folk by Association sang in the morning air. [Link].


I want to thank all the artists and the great number of people, at every level, that make Gasparilla possible. Yes, I wish some of the crafts could be taken out, but it's still one of our premier shows. Treat yourself: Go.