The iPhone in combination with the Hipstamatic application has become very popular, even with professional photojournalists. In the right hands, it has won third place in a major PJ contest, generating a lot of controversy. Iphone (and now Android) enthusiasts have embraced the Hipstamatic. It takes several seconds to process in between shots, burns in selective areas, and increases contrast. The result is a recognizable look and feel. It is similar to choosing an alternative film/camera in the old days. They can be subsequently processed with other apps. 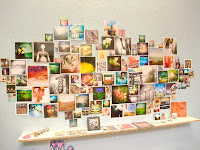 Jennifer Kosharek and her Even N Odd Gallery put out the call to artists for the Hipstamatic Show, and entries came in from near and far. The colorful small prints tiled on the gallery wall looked like azulejos. 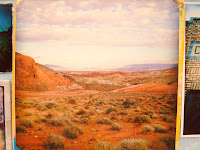 From Blue Lucy's [Link] Chad Mize, a classic Western landscape in beautiful color. It is a carefully composed image with clear fore-middle-and back ground all under a golden hour sky.

Jennifer Kosharek brought a photograph of a work at the Holocaust Museum. It took me a second to see the actual content (arms reaching against barbed wire) in the small print. It was the graphic elements that drew me in.

I think this is a body part from a chicken. I'll have to ask Matt Deterior next time I see him, though I'm almost afraid to. It's an elegant composition in spartan color. 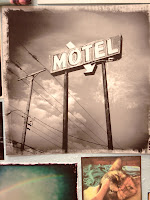 I'm noticing that motel and other signs are becoming more popular motifs in photographs than they had been in recent decades. This tradition goes back to Walker Evans, who seized it upon seeing Atget's photographs. This towering sign under creamy-looking skies is by Kyle Randall. 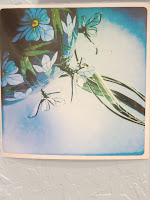 On the left is a city street view by Richard. The Hipstamatic look plays well into the grittiness of the city. On the right is a botanical image of flowers, very graphic in nature, with beautiful color. Angela Ferrara sent it from Brazil.


Congratulations to all the artists and to Jennifer Kosharek/Eve N Odd Gallery [Link] for a very good show.