Photography is undergoing another transformation. The pixel race shows some signs of abating, stabilizing somewhat -- with professional exceptions. Miniaturization in electronics is making people question carrying large pro DSLR bodies and shoulder-numbing, bankruptcy-inspiring bags of lenses. Now there's a 41 mp cell phone on the way. The software is following that trend. We're seeing this reflected locally, too.

Duncan McClellan Glass has a photography exhibit up for the next two months. Curated by Jorge Vidal, its theme is "Projects". Images resulting from a focused effort over time. Working in projects as opposed to looser collections or working in one unbroken string, breaking the work up by temporal periods or other arbitrary categories. Either way, everybody ends up with a body of work, no matter how it is mapped out. Photographic galleries and book publishers openly demand work in project quanta as well. My point here is that the great majority of recognized photographers work in projects at this time. It is the currency of the photographic realm, exactly in the way working "in series" is for other media.

Most of the photographers shown were selected from those having prior connections to DMG.


Richard Logan is a photographer based in Clearwater, Fl. He worked as a commercial photographer for a long time before letting that go in favor of making art. On the left is "Torso in mud", made of photo-transfers onto metal plates. Logan's work in this show uses this technique. The effect is to break up the image into sub-frames, in this case with a 3-D tiling effect. In this image the model's body is nearly abstracted. It becomes a landscape of sorts with the mud patterns serving to break it up into curiously map-like sectors. 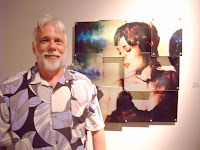 Logan does variations on this technique, like in "Untitled, Side 2". Here the metal plates are hung linearly, with neat, consistent separations between them. Here you can see the back of one, and just to the right, the front of another. The segmentation makes for an unusual presentation. On the right is a photo of Richard Logan with one of his works, "Women with camera".

Steven Gregory was the 2006 Photographer Laureate for the city of Tampa. He has stated that his influence was the work of Albert Bierstadt [Link]. Like the painter, Gregory does these meticulously composed, strikingly beautiful, romantically & dramatically lit, thoroughly processed majestic-looking photographs of local landmarks. This stilt house is rendered in a surreally perfect manner. [Apologies for the reflections]

Thomas K. Mack does a wide variety of work. Everything from cats to travel, portraits and weddings. In the picture on the right, "Milan - Lago de Como" we see a travel black and white photo of what appears to be the viewing deck on a ferry (?). The spatial feeling here is accentuated. This is like a personal entry in a travel journal.


Greg Francis spent a year working on his "365 Project", during which he took one photo every day for a year. He used his iPhone 4 to make these images. [Link]. Even though the prints in the show are mostly of signs from the area, if you look on his site you will see there was a very wide variety of subjects involved. It is not by chance that his pictures have strong graphic impact. Francis is a graphic designer. The images are approached directly,clean, without contrivances or gratuitous artifice. The history of signs in photography is long and rich. Start by Googling "Atget signs" and "Walker Evans signs".

Note that one trend the iPhone pictures walk away from is that of super-sized prints. These, like wide-screen Tvs, rapidly became a cliche in the early 2000s, but like large meal sizes became the convention. 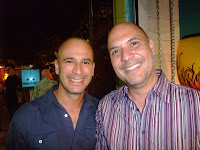 On the right is curator Jorge Vidal and a friend during opening night.


Then there was Box Fotos and their shiny new Airstream trailer nee' gallery parked in front of DMG, looking like a UFO on wheels. The brainchild of Matt and Rebecca Larson, it is the art photography equivalent of the food truck phenomenon. A moveable feast of a micro-gallery that sets up anywhere. Matt has worked in marketing and doing a variety of photographs for corporations. Rebecca was the City of Tampa Photographer Laureate for 2005 and is a studio artist and Associate Curator and Registrar at the Leepa-Rattner Museum. Both are very involved with alternative processes, old-school and digital. I saw another Airstream art project once, a moveable gallery for pottery in a very large Airstream and pictured it during the NCECA convention in one of my blogs. The Larsons are planning on traveling widely and expanding on what they are currently doing with the Airstream after retiring. They run a variety of workshops on everything from iPhone/Hipstamatic use to pinhole photography. They also do portfolio reviews. [Link].

Inside the Airstream, it's tight quarters, but what strikes you immediately is the consistent attention to quality of the highest order in every display, no matter how small. It's like being in a micro-museum space. The focus is on alternative processes. The technical quality is top-notch, encouraging photographers to explore their own vision through the medium, and inspire confidence in collectors. 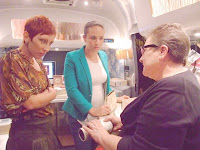 Rebecca (on the right) explains the fine points of the design and function of a pinhole camera. BoxFotos is a beautifully conceived and executed idea.

Congratulations to all the artists in the show, to Jorge, Duncan and the crew for a good show.