Art embodies the zeitgeist of the times, sometimes of times past or future. In the work of the two South Korean artists in this Mindy Solomon show, painter Sungyee Kim and ceramicist Kang Hyo Lee, the balance between traditional forms and the present is a defining aspect of the work.


Sungyee Kim's paintings, according to her artist's statement [Link], demand "purity" in "...belief in spiritual values..." they open a portal to the ideal. She places at the core of all this the idea that Nature and "good artwork" are incomprehensible, the latter resembling the former.  Painting is the mirror of spirit, like our reflection in water. Her work is not focused on discovering an answer to the mysteries of life, but in the exploration.

"White Drops, 2007" a charcoal and mixed media piece on paper, could be seen as an abstract image, but it also looks like snow, and in effect, the white drops look like they could be negative. The pattern suggests snow falling, dandelions in a field in summer, or a section of the sky from a Hubble photograph.


Ms. Kim's philosophy melds parts of the I Ching with Taoist ideas about the transformation between the artist and his materials. This is reaching back into traditional ideas from the past, but not slavishly, more in the sense of recontextualizing them into the present.

Note the similarity between "Infinity from One", and the visualizations of the earth's magnetic field (sans the effects of the solar wind). Also the "One" is the contact point between two entities.

Kim's paintings partly deal with semi-abstracted patterns that have analogs in nature. They are simultaneously metaphors and similes.


Structures, philosophical, physical and metaphysical abound in these paintings. Here, as in others, we see two different types integrated, or more of a dichotomy reconciled. There are the four dots, aligned in the form of a cross, each with its circumference and center. Look closely at those centers and you will see they have bits of the darker polymorphous forms surrounding the four central dots.

A lot of artists might consider these structures a kind of trap or straitjacket, but Sungyee Kim shows how as open-ended forms, they are liberating and resonant between the past, present and future.


Philosophy and performance are integrated into the ceramic work of artist Kang Hyo Lee. Perhaps it is best to begin by watching a video of the man at work. This will give some idea of the dynamics involved in the making of a large Jar: [Link]. Note how the physicality of this is as much performance as it is ceramics.

Lee Kang Hyo specializes in onggi ware and tea bowls. Onggi ware is a traditional Korean type of ceramics used to make vessels of various sizes in which to store bean pastes, vegetables soy sauce and other goods. The surface of the clay has bubbles and is semi-porous, good for fermentation. He works in the Punch'ong tradition of  grey stoneware decorated with a white slip, though a range of colors is available through the process, which in his case involved building a traditional kiln. Tradition is at the core of Lee Kang Hyo's process, but he keeps the flow between the past and present open, allowing each to inform the other.

The jar pictured on the left shows the white slip and the subtle pinks and reds possible. These works have a strong sense of being connected to a tradition and place and simultaneously transcending it. If you look closely at the white, you will see that it has texture and minute color variations and subtle lines.

In this work, the range of colors is nearly complete, and the performance aspects of the glazing are readily visible, with strong brush strokes and finger marks. The balance between rigorous order and freeform expressiveness is not fixed in this piece. It floats like a living thing, depending on the viewer's position and outlook. 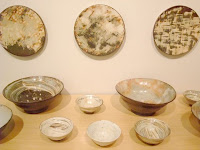 There are also many tea bowls in the show by the same artist. These bowls are used in the tea ceremony to cool off the tea. As with everything else used in the ceremony, the aesthetics are very important. These tea bowls are exquisite, and seem to have Buddhist influence. 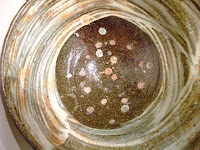 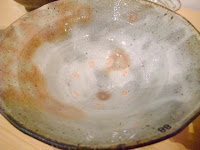 Here are close-ups of two tea bowls from Lee Kang Hyo. Note the strong brush/finger marks, and the counterpoint(s) of the dots on the one on the left, and .
the Buddhist symbol of the hand on the bowl on the right.

I want to thank and Sungyee Kim and Lee Kang Hyo, along with Mindy Solomon and her crew, for a very good show, and broadening the arts horizon in St. Petersburg by bringing in work from across the globe.