In spite of the surreal shuddering pom-poms and cheerleading  recently read elsewhere, the boots-on-the-ground reality is that 2011 has not been a good year economically for the local arts scene in the area, particularly in St. Pete. Buyers have been scarce. Those galleries that appear to be blooming are doing so thinly disguised as party venues. Their main source of revenues is not art, but selling admission and then alcoholic drinks, food etc. to the party goers. One of them is also a co-op, meaning they rent wallspace to artists to make money. I clearly understand the appeal of gallery openings and arts parties. People feel the energy that emanates from art and creative people. It renews them, makes them feel better, if not more whole again. They're willing to pay for this, and that is low-hanging fruit for many.  It is spreading as a business model. Or those that have an opening, with a high admission cost party, then are open subsequently only on"request". Call and try to arrange a viewing some time.

Several art spaces have failed and vanished in 2011, some along the 600 block. From private conversations with others, I can say more are hanging by a thread. Some of them are venerable institutions. This is economic Darwinism, I know, but it would be sad to have the survivors a few years from now mostly be those that are throwing the biggest/best parties. We are headed for where museums have been for some time: Art-entainment.

In the midst of this, people who love and are genuinely interested in the survival of the arts scene in a recognizable form are swiftly plotting mergers behind the scenes between strange bedfellows where one is in need of intensive care and the other a model of financial health (due to party/events). As these plans gel, you will read about them here. Through the fog, there are mirage-like blueprints for a new Arts District, and apparently investors as well. D-a-r-i-n-g. There are galleries, mostly non-profits, or those with other means of support, that are doing well, or at least holding their own -- without turning into party venues.

2012 is going to be nothing if not a suspenseful year: A thrill ride with an unclear destination. One with the lives of many who have put a lot on the line out of their love of art. Traditions hang in the balance. Some of our beloved spaces, too.

There are so many events and the three mainstream corporate media in the area do 1-2 reviews each a week. Whatever I don't do is simply lost. What makes it onto Art Taco will exist as long as Google lives, and will be web-archived for the future. Whatever else this blog is, it soon dawned on me that it is also a history of the arts here.

I want to thank so many people... the artists, gallerists and many others who have generously supported what I do with their time, transparency, answering endless questions, incuding many I had not thought to ask, posing for pictures, educating me, showing me things, helping with esoterica, and voluntarily becoming part of this process. We share this passion and understanding. Without you, there would be nothing to write, and I am grateful.  A special note of thanks to those who guest-blogged here in 2011, and a note to everyone else that this space is open to guest blogs.

To the thousands of wonderful Art Taco readers who are spread out around the world: Your comments and visits spur me on, the feedback helps me stay on track or jump off as needed. Many of your suggestions and ideas, as you know, have made it right into the blog. You catch my mistakes and correct me lovingly. Thank you.

Last but not least, my beloveds and personal friends, who sometimes unknowingly, do a lot of the unseen heavy lifting. You know who you are.

Though I am swamped with more work than time, there are surprises in store for 2012. Stray Tuned.

Ps. You may be sitting there, your face illuminated like a saint's in a medieval painting by the computer screen, thinking what can *I* do? There are many things, but the main one is: Commit to buying a couple of works of art in 2012, commensurate with your earnings and budget. Give your child $10-20 to buy one of their own. That feeling of well-being you get when you visit a gallery can be yours year-round in your own home and office. You can pass it on to your kids, visitors and friends. Bring them to galleries, too. Talk with the gallerists and artists, talk about prices, as well as the art itself.

Stop being a spectator and participate. No one else can take your place.

As this tumultuous year winds down to a close, the number of arts events is small. But there are two must-see things going on. The first is a proven, sure thing, one I can recommend because I was there at the opening, and it was extraordinary fun...

First Night @ St Petersburg (several locations) - First Night is the New Year's Eve (Saturday, Dec 31st) event held in downtown St Pete. There's lots of venues and performances by many of the top groups in the area. See here [Link]. Buy your buttons beforehand if you can. Rebecca Pulley and Ronnie Elliott at the History Museum? Yes. But...one of the best, must-see things on First Night will be...

The Peek in a Pod from 6–to-Midnight, South Straub Park


The University of Tampa has a show consisting of the work of eight of its senior students in various disciplines within the art department, from commercial design to fine art. The variety of work in the show makes it quite interesting, and draws out the differences between the types of work.

In the picture at left, that's artist Lisa Harasiuk, who's been reviewed here before, in the center.[Link], [Link]

Cliff Klein wants to remove the cultural accretions that determine what and how we see, and return to the Natural, Paradaisical state of early childhood, before the filters blinkered us. He also rails against the academic depictions of space, as we see in the picture at left. It walks away from the usual illusions of perspective and cultural convention.


Amanda Pulham's "By a Thread" is of two young models arranging a human skeleton hanging by a thread. The ephemerality of life comes to mind in this memento mori. The youth and healthy looks of the models contrast heavily with the skeleton. If you look closely, the female model's left foot has a sock or some kind of covering on it. This same model and covered foot appear in another painting in the show. 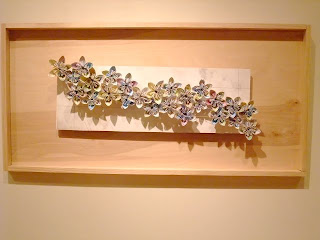 I am seeing more and better paper sculptures around these days, and Danielle Champagne's "Mapping" is a great example. She says her use of book pages as material stems from the sensory joys of working with it as well as the linear patterns, innate narratives/relationships/communications between people and more. "Mapping" is an object of a complex and extraordinary beauty. 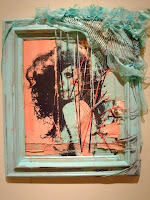 On the right is William Stryffeler's mixed media work "Something Blue - House Clown". In this series which the artist calls "House Clowns", Stryffeler's addressing commercialized self-image and those (apparently mostly women) who are adrift in the tides of fashion and ideals that cannot possibly be met, thus insuring failure and a continued dependence on product.The figures come across as isolated and alien, and not easy to empathize with. 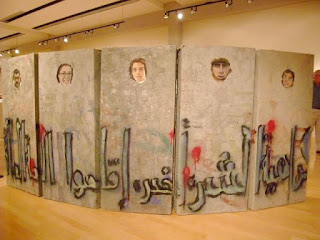 Olivia Harsham had an installation symbolic of the wall that divides Israel from Palestine, complete with graffiti, and images of the people on the other side, on both sides. This is a well-publicized, emotionally charged issue personalized in this work in a creative manner. 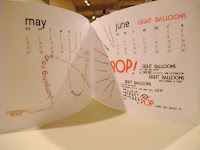 Thuy Pham is a Graphic Design student who is specializing in magazine layout, packaging and more. She, like all the students in this show, had several interesting and competent works shown in a variety of media. On the left is a visually striking calendar. 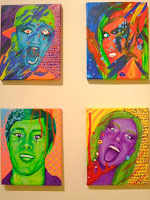 Kaylin Hovance is a Graphic Design student whose work is primarily competent design, but the quartet of portraits on the right titled "Freeze Frame" are of her friends engaged in exaggerated poses and blazing colors caught my eye. I chatted with Ms. Hovance for a bit. She's very clear and open about her work. 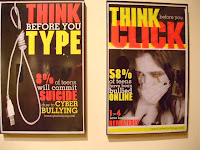 Jackie Mroczka Britton is another Graphic Design student focused on commercial design. In her works "Call to Action I & II" the posters are effective against bullying.

Having been exposed on several occasions to Lisa Harasiuk's work, it was a pleasure meeting her at this show. There's a palpable emotional tension to her work that connects witht the viewer at a visceral level. 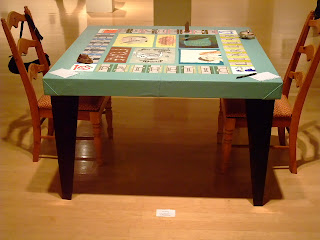 The installation shown above by Lisa Harasiuk is titled "The Game of Taking Everything You Can", a mixed media piece made of acrylic, tempera, paint pen, gel transfers on paper, on canvas, wood and red clay. It is a life-sized gaming table and chairs,  but the game, though reminiscent of Monopoly at first glance, is deadly serious and about life. 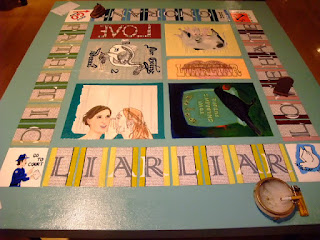 It is an acrid, bitter game about being caught between a rock and a hard place, a situation where there's only two options, to stay or leave, and the latter may be the only way to cut one's losses and save face. This work gives substance to a situation a huge number of people in the US find themselves in.

And it is one of two tables around the same theme. 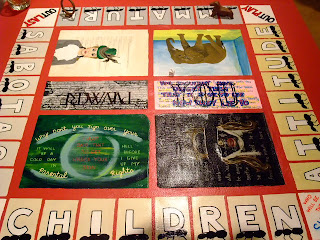 Both of these works are potent, nothing held back pieces that are gripping in their content. To anyone who has been tangled-up in a fault-type divorce gone nasty, this is familiar ground. To others, it is a warning. As works of art, they're vibrant and rich with human energies. 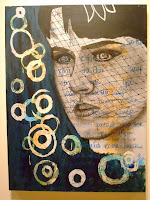 Lisa takes this energy into her paintings and drawings, too. On the right is "Lost, Refusing  to See What You Are Doing to Those Around You". With these works one sees how the personal can transcend itself and enter the universal realm.

Congratulations to the eight seniors who exibited their work, to Dorothy Cowden and the Scarfone/Hartley Gallery and to the University of Tampa for a good show. 310 N. Bloulevard, Tampa.