Eve-n-Odd Gallery and The Letterpress Truck

Jennifer Kosharek's Eve-n-Odd gallery is at 645 Central Ave, in the Crislip Arcade. She is best known for her mail art and association with contemporary Fluxus artists. Recently, she had a t-shirt show. I missed the opening, and a lot of them were sold, but what remained was impressive. Two stood out, the one in the photo just to the viewer's left of Jennifer Kosharek, by Jennifer Chandley and one by Coralette Damme. There were also works by Michelle Hill, Jennifer Shull, Psynner, Bibiana Padilla, Adam S, Rob Stephens, and Saori.

The gallery has been open for over a year. She carries a lot of  work by local artists, including Calan Ree. I took home one of her small heart bowls. Jennifer mentioned she had coordinated a stop on the Letterpress Truck's journey, and it was going to be dropping by a little later. I went on to the Morean (there are enough places open on Central on Sundays to make a visit worthwhile), took in the work being gathered for the "Blooms" show, which will be reviewed here soon, and returned to Eve-n-Odd to find the Letterpress truck parked outside.

The truck is from Movable Type [Link], a 1982 Chevrolet Step Van, AKA "The Sweetheart of the Road" that has been converted into a long-range rolling print shop. Kyle Durrie hails from Portland, Oregon, where she is the proprietor of Power and Light Press [Link]. She customized the truck's interior for this journey, putting in paneling, cabinetry, a small bed in the back, counters and more. She is using a press from 1873 (!) on a daily basis, sometimes holding workshops on finding and using these machines.


Durrie is on a long road trip. She told me about twenty-one thousand miles. There are red pins all over that map of the USA. She's been on the road for some time, and will be traveling through April. It began on June 11, 2011.


On the right you can see Ms. Durrie in her truck. On the left is her press. She is holding a print from it, the kind that visitors to the Press got to print on their own and take home for a very reasonable price. Note the customized interior of the truck, done by Kyle.


On the right you can see the process taking place, as Kyle explained to the new printers what and how to do it. People had a great time with this, and many expressed interest in obtaining a press for their own work. 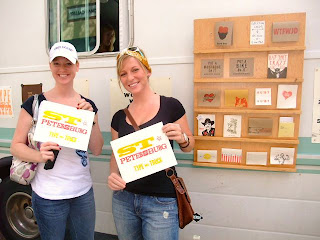 Congratulations to Kyle Durrie and Jennifer Kosharek for a wonderful Sunday afternoon. 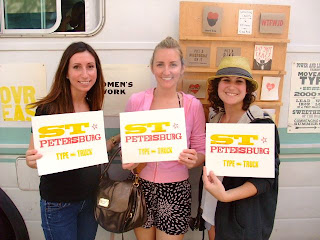 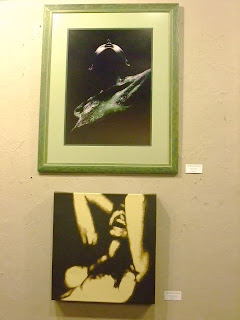 
Gil De Meza is a retired Professor Emeritus from University of Tampa. He has mentored some of our best artists and gallery owners during his career.  At a gallery talk I had the pleasure of speaking with Gil at length. He remarked that he grew up just a few blocks from where the show was held at the HCC Performing Arts Building Art Gallery, run by Carolyn Kossar.

"The Boy with the Green Hair" is not just part of the title of this work, it is also that of a 1948 movie. The tale of a war orphan whose hair turns green, and who realizes his predicament and that of the world, which is about to go to war again. He is torn between shaving his hair, being silent and leading a normal life, or warning people about the horrors of war. If you look carefully, you see horizontal lines from edge to edge of the work. There's five lines and four spaces. Sound familiar? Just like the stave lines of musical notation. Gil told me music is where a big part of his inspiration comes from. Gil plays the trumpet. This work goes back to his childhood, to the days before WWII. De Meza's work are nothing if not richly textured at many levels. There's a speaker near the center just above the bottom edge, which the artist told me is a reference to the many air raid drill sirens that were tested routinely.

[Remember the nuclear attack siren drills? Crawling under your desk to try to survive a 30 megaton nuke?]


On the left is a side view of Requiem for the Boy with the Green Hair. Note the textures, door stop, and many coat hooks, and the aforementioned speaker at the bottom. Why? These are things that are found in the interior of a house, in private spaces. Although the painting surface is open, these are a reminder that we are looking at an interior space. These things also stop doors, imposing limits, and let us hang our coats, our covering, assumed identity. 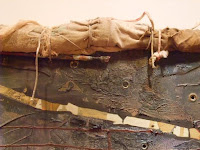 On the right is a close-up of the upper edge of the work. There's this longish bundle, made of canvas tied up with string. Canvas like that found in a tent. Another allusion to war. The rivets could be interpreted as bullet holes, De Meza told me. 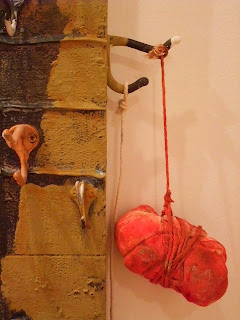 Then there's this hook on the side of the frame, from which dangles a bloody-looking bundle, looking like a dead fetus. The death of innocence? Peace? Childhood? This reminds me a lot of a sculpture by Michael Massaro titled Sinew of Indifference [Link]. Also, see the lighter color of the paint cutting in from the edge? That's the military olive drab of the day. This dark mixed-media work is part anti-war  protest, and a reminiscence of the awakening of a boy who would later become an artist. 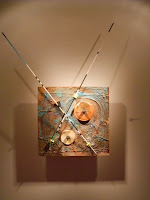 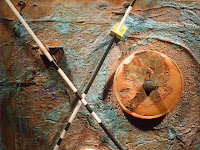 On the left is "A Conversation with the Imposter, Remington Knollwood", by De Meza. The artist has no problem going above and beyond the surface of the paint and its frame edges.On the right is a close-up of the same work. There's repeating dualities in this work. The formal tensions between them serve to energize the work. While a lot of De Meza's work looks very abstract, many of them have some back-narratives.

Gil casually mentioned that in "Pretty Woman", the hex heads on the bolts are like nipples. 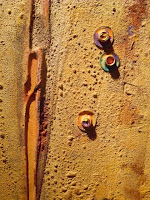 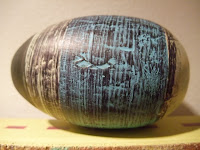 On the left is a close-up of the work above, so its textures and subtle colors can be appreciated. On the right is a close-up of the egg that lies on the upper edge of the frame. It could be taken as a symbol of fertility, and more, but the artist says he got a good deal on several of them.


There were many other strong works in this show, which is now closed, but I hope the above help to give a hint of the depth and breadth of De Meza's mixed media works. Congratulations to Gil De Meza, thanks for taking the time to talk with me, and to Carolyn Kossar for a very good show.


After six years, thanks to the pressure from the media focus on Tampa during the RNC convention and TECO agreeing to shoulder the power cost, Chicago-based  Dear Productions, run by Lighting Designer Tracy Dear, has been approved by Tampa City Council to light four bridges across the Hillsborough River. It is called "Agua Luces", which is bad Spanish for "water lights". You can see Dear's prior projects here [Link].

$30k has been approved for the design work. The actual installation of the LEDs will cost much more.  Below is a picture of another of the eleven Chicago bridges Dear lit. It is easy to see how this will help give the impression to national media that Tampa is a progressive, arts-oriented city -- for the minimum investment.