The game of Rock, paper, scissors dates back to the Ming Dynasty. It was invented around 260-220 BC., and continues to be played to this day. The art in this show is interrelated to other art and ideas in a similar way to the elements of the game. Guest Curator of this show and gallery director of Balzer Art Projects [Link] remarked: "In this exhibition artists are brought together from different cultural and artistic backgrounds – moving on the common ground of visual representation. As much as the game, the medium paper – in the context of visual representation, its necessity for daily existence and its potential for visual versatility is key to each artist’s work. At the same time, fragility and ephemerality are being highlighted by playing with the medium. Text and language, inseparable from paper, permeate each artist’s work."  Work by Oliver Lang, Ao Tajima, Mimi von Moos , Nicole Schmid, Andi Bauer, EddiE haRA, Nici Jost, Tom Fellner and Sebastian Mejia is shown


These interactions create currents and tensions in these works, individually and collectively, thanks to Ms. Balzer's curation. The photographs of Oliver Lang in the RSP show were made during one trip down the east coast of the U.S., in which he approached people on the street and asked them to pose for him. He used a 4x5 Linhof camera and lights, the set-ups taking time, which both defused the immediacy of a quick street portrait, and gave some of the subjects time to meditate on what they wanted to project or forget about it. Lang also plays heavily with the backgrounds, imparting a subtle tension between form and content that is carefully modulated. This jaded-looking Neo-Millenial Venus on the half-shell, near the beach (Looks like the intersection of Collins Ave. and Lincoln Road on South Beach) though what we see is the commercialized space bordering on it, poses not just projecting an image, but as if asking a question. Note the carefully arranged composition. Her waist and hands line up with the sidewalk behind her. The filled-out white top is echoed partly by the roundness of the buiding to the viewer's upper right, and it is all leading to and from the figure, though it flattens out as a backdrop, popping her out in an almost 3D manner.


These concerns can be seen in Lang's work on the left, though here the figures tower over the background. The whiteness of the sky and snow and the darker bands of the road and background echo the lighter and darker skinned faces between the man and little girl. On the right, form is overwhelming. The yellows on the man's shirt, trams behind him, blue of the sky and his red hair dominate this image


Tom Fellner showed large watercolors, about 2x3 feet. These works combined classic landscapes with sex toys and other toys as well. These themes, which seem and to a degree are incongruous, riff off one another well. The shrill colors in this one or dark tones in others trip the viewers' radar and alert us to pay attention. Ultimately, these images do not yield to our attempts to force them into a sensible, unified whole and demand to be accepted on their own terms.

Sebastian Mejia, who is from Colombia, had a series of large (4x5 ft or so) photographs as two-dimensional reliefs. The work appears to originally been sculpted out of graph paper, then photographed, and the print is the end product. The effect is like one of these performances where the artist builds something, but the photograph is the presentable and acquirable object the viewer sees. The artist imbues these field reversals with a sense of intellectual humor. 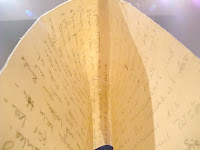 Mimi von Moos' "Textile" states the problems inherent in language, which is one of her concerns as an artist. This piece is a looped scroll with words written on the inside that have no end or beginning (shades of Finnegan's Wake). It is about 6.5 ft tall, and is very sculptural. With its German words on the inside, it is almost impossible to read unless one has a lot of time and is a contortionist, but that is not the point. The relationship between the paper and the word, the form/conveyance and the written contents make this a riveting, mysterious and beautiful artwork.

"Postcards from the Alps" a series of works made on actual postcards sent to his girlfriend, by EddiE haRA, who hails from Indonesia, are a fusion of several cultures & styles. There are tribal indigenous Indonesian mythological motifs, graffiti/street art, and clear western influences. The result is highly individuated, distinct work.

Photographer Jost has works in this show from an ant's eye viewpoint. The one on the right is of her studio or building where she lives. The somewhat disorienting point-of-view serves to deconstruct the building's facade and cause the viewer's mind to resonate between the vertical and horizontal, between what we know and what we see. I noted there was a repeated emphasis on minimal post-processing, or premium on near SOOC (straight-out-of-camera) qualities in these and Lang's pictures.

Congratulations to all the artists, Guest Curator Isabel Balzer and Mindy Solomon for a great show, and thanks for a tantalizing local glimpse of current European art. A special note of thanks to Ms. Balzer for taking time to kindly talk about the works and answer questions.