Have Your Cake and Eat it too: Remix Edition @ C. Emerson Fine Arts

C. Emerson Fine Arts recently celebrated its sixth birthday. Owner/Director/Curator Lori Johns has done an admirable job with the gallery, exhibiting a wide variety of artists over these years. She has also raised the bar for the arts in St. Pete and the Bay Area, and enriched the arts community.

To celebrate, CEFA put on a Have Your Cake and Eat it Too, Remix Edition show, which was more or less divided into artists that have shown there before, and the Working Method Collective, a bright and fun group of graduate students from Florida State University.In the picture at left they can be seen "deploying their chutes" by running in front of the gallery. I asked if they would do it, and without a moment's hesitation they did.

[Eighteen artists, which means a lot will not be reviewed here due to the sheer numbers, not any kind of hierarchy.]


Jason Snyder is a self-taught painter who evolved from the cute-creepy/neo-victorian school into a more personalized style. The use of oval framing, pastiche of old and new, and the big-haired cyclopean waif head. I am seeing more and more drawings and paintings where hair figures prominently. There's a pun in the work on the right with the eye and the needle.

Michael Massaro's "The Slanderer" has been seen in this blog before [Link]. The tangled braid, which goes to the floor. the gilded head, and pained expression make for an emotional, visually gripping work. 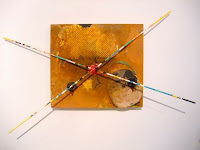 Gil de Meza's work is informed by his passion for music. One of Lori John's mentors while she was at UT. His works have some of the most sensuous textures and earthy color, done with house paint. He has a solo show at HCC Ybor that will be reviewed here soon.

Daniel Mrgan is no stranger to these pages. In "You Cut a Perfect Slice", a pencil, ink, watercolor and colored pencil work, one of his blocky textured dystopic characters seems to be blue and in recovery from having had a perfect chunk cut out of him. One can't help but think this may be autobiographical in nature.

"Garden Revisited", a digitally manipulated composite photograph by Lew Harris, reportedly one of gallerista Lori John's mentors, is hardly the original Garden. Here we have a paradizzo, a small walled enclosure, with a small harem of three nude apple-munching Eves, while the only male figure, Adam?, is dressed in a suit, and arms crossed in a defensive posture, stands like a voyeuristic surveillance bot, taking it all in.


Neverne Covington's "Untitled Plant Study" is a charcoal and watercolor that, like so much of her work, is evocative in a very distinctive, mature way. I reviewed her excellent solo show at HCC Ybor recently [Link].  This truncated, agonizing plant speaks volumes about mortality, not in a morose way, but in the vibrancy and persistence of life.

[Disclosure time: I own a small print of Chalet Comelia's, from an installation at CEFA a while back.]  On the left, a portrait of the artist with the anchor print of "I take every year with me", a work involving several small prints of the artist making a cake, then putting into that blue suitcase by her feet, the framed print is of her walking between large cypress trees into the forest.

Farming corn, one of the staple foods of man, has taken many forms, presently in Big Agricultural form. One of its avatars, corn fructose, is a controversial issue for many, mostly negative reasons. Echo Railton's "Maize" confronts this, in a multi-perspective nicely executed large charcoal drawing. She shows us the process, from fields of corn, to grains, silos, the chemical formula for the corn fructose molecule, and at the upper right, a microscopic view. The effect is not analytical, but holistic, stating the problem as it is. Although optically absent, the people who consume this (all of us, at one time or another) are palpably present in Echo's work.

"Events" is a conceptual series by Jay Corrales of concert posters for events and shows that don't exist. This one is Competing Narratives at New Angles.


This is more of a record of a performance piece. Tyler Dearing raked the leaves around this one tree and took them back to its trunk, forming a cone. The process left marks on the ground that cannot be seen in this photo of the work, but are faintly visible in the original.


I want to wish C. Emerson Fine Arts a Happy Sixth Birthday. Congratulations to all the artists and Lori Johns for a memorable and intimate show.