"Don't it always seem to go
That you don't know what you've got til it's gone
They paved paradise and put up a parking lot"
Joni Mitchell, "Big Yellow Taxi".


Salt Creek's last show was packed. People filled the two galleries, moving a little too slowly, as if trying to engrave things in memory, trying to hold onto something while saying good-bye. It was the end of an era. The old building is being sold, the space will become a parking lot. Sounds like a song, I know [Link]. It was a difficult evening.

The artists will individually go on, but the group will be dispersed. There's been talk of help, people getting media attention for looking for help, but so far nothing. Pat Burgess and her father made Salt Creek possible for over twenty years. Affordable, roomy studios and a kind landlady that attracted a wide variety of artists and generated its own brand of creative synergy and identity.


The building was old and needed a lot of things. Artists often have headstrong personalities and/or run out of money. This warren of studios exacerbated some of the problems. It wasn't what one might think of as Paradise, but close enough for artists.

On closing night, I ran into many people I know and love. The conversations had to do with many things, but on that night there was a sense of urgency in the air. Where else could we expect to regularly run into each other without making arrangements? Everywhere I went in Salt Creek that evening there were memories and echoes of conversations, the mysteries & revelations of art, and intimacies of friendship.I walked into Girard Louis Drouillard's studio. The stillness of time run out permeated the central room. Outside, the Creek waxed to the tidal pull of the moon at dusk. Inside, my heart to memory, remembering when Girard moved in, the works that covered every bit of surface not covered with tools in various stages of gestation. I said good-bye wordlessly in the falling darkness.

Upstairs, in Herb Schnitzer's studio, where the boxes of historic prints lay stacked and ready to be moved, I met a young artist that told me an almost impossibly mystical but true story and showed me pictures on the phone about her art "knowing" something she didn't about herself. Private things, the kind I can't write about here, but wish I could. Herb was being interviewed and videotaped. Salt Creek was this kind of place, where things large and small could happen -- and often did.

I ended up in Michael Conway's studio, a roomy space on the ground floor. Many a visit to Salt Creek would end up there. A coterie of regulars sprinkled with new walk-ins would engage in talk about every topic imaginable. Mike, ever the gentleman, was a perfect host. At the end of this evening, Michael announced that he was selling, for that night only, prints for a dollar each. People leapt to the rack. It was a perfect ending to Salt Creek, peopled lined up, going through prints. A young man told me he had no money on him, and I gave him a dollar. The moment was an analog to communion. Pat Burgess and I spoke. We were both glassy eyed, and I thanked her profusely. Michael and I said good-bye, our eyes locked. The air was warm, the parking lot was nearly empty. I looked back at the green building several times. 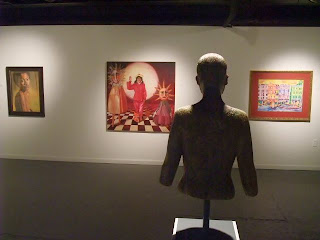 Thanks to all the artists, Lance Rodgers, Pat Burgess, and all who attended Salt Creek for something beautiful and rare.