We're in the doldrums, in the heat of summer. I hear gallerists and artists complaining, not having shows, waiting for the cool of September. Some aren't throttling back, but seizing the everpresent moment...

Katherine Michael has the kind of genuine smile that has you smiling back automatically. She paints out of joy in the style of Folk Art. Like many artists working in that vein, she is self-taught and paints on a daily basis. Katherine told me her parents moved around the heartland, in southern Illinois a lot. Life took her in several directions before starting painting. Foster parenting, working a small hair salon, and nannying in New Tampa where she currently resides. All of these experiences are infused in the work.

It is easy to fall into the idea that Folk Art is done by locals who live in outlying places. In the case of Ms. Michael (and many others) this is not true. The work is informed by her travels, which are diverse and extensive.

The series being shown is about growing up in the heartland during the 1970's. It is full of icons, from television, movies and consumer goods that a child would enjoy. While not particularly realistic, it is easy to identify the figures depicted. As with many Folk Artists, Katherine is extremely sensitive to body language, whether in micro-expressions, gesture, tensions, and more. These expressions are carefully and precisely modulated, though not necessarily in a conscious manner.
The portrait of sitcom icons Archie and Edith Bunker, from the sitcom "All in the Family" on the left shows the couple as younger than they were. The way their eyes lock, how they lean into each other, and their facial expressions speak volumes about their relationship. Note the background of floating flowers and how they reframe the figures. These backgrounds are a repeating trope in the work, and as important as anything else in the frame. 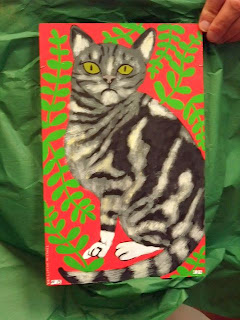 Whether a pop icon or childhood pet, all of the figures are intensely individuated. This gray tabby, with its tough-guy face, chunky body and front toes that seem to be in a gesture of impatience, is still what Michael calls a "precious soul". The red ground and green ferns formally articulate with the cat's stripes adding to its vibrancy and radiant life energies. 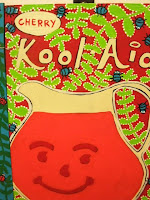 At one time, one of the best parts of childhood was when mom would make a big pitcher of ice-cold Kool-Aid on a hot summer day. The artist remembers this icon, and makes certain we know what her favorite flavor was. The white points on the leaves in the background make them seem electric, similar to Kirlian photographs. The red pitcher comes across like an elixir of life. 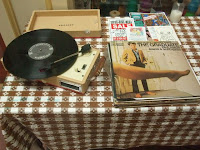 As with all things at Jennifer Kosharek's Eve N Odd gallery, there was attention to detail in the form of an old turntable playing music from the 1970's.


The paintings are only part of the story. Each has a written narrative that is tucked away in a numbered slot in a large envelope on an easel, looking a little like an Advent Calendar. The stories are on slips of paper looking a little like what one finds in a fortune cookie, and adding to the context of the work. 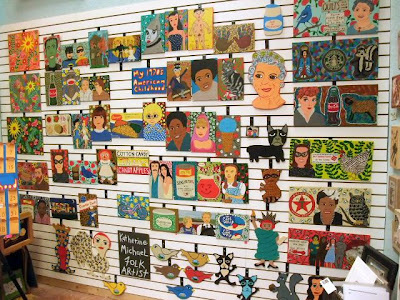 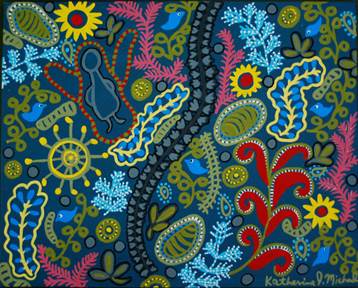 Look closely at the left edge of the above picture, and you'll see a vertical column of three works that look like florals. They are from Katherine Michael's "Heaven" series. There is a key to the iconography in these works on her website.

Congratulations to Katherine Michael for a moving, beautiful solo show. The work is life-affirming with a benign world view. Eve N Odd gallery is building a solid track record as one of the top galleries in the area, completely out of proportion to its size and budget.


My 1970's Childhood: Katherine Michael @ Eve N Odd Gallery - Fifty paintings and stories by Ms. Michael in this one-woman show. In the Crislip Arcade, at 645 Central Ave, suite 11. Free admission. While you're there, get one of the Coloring books, which I consider one of the best bargains in the arts in St. Pete. Runs through August 3rd. 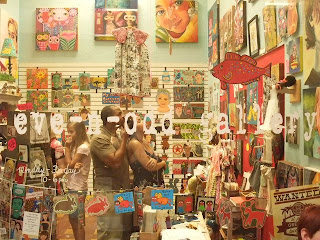