I can divulge the location of these pieces because they've already been painted over. Luckily, I happened upon them a little over a week ago so you get to see them, and they will live on in web archives. They are depicted left to right as found on the wall. A stencil, one I think I may have seen before. It was a little over two feet tall. If anyone has any idea if this represents something, please send a comment. 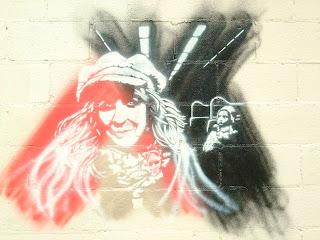 This was done by the artist I dubbed long ago as the "Master of the Triangles". He or she does stencils of women in different roles and stages of life, always looking empowered, fulfilled, and treated with great empathy. 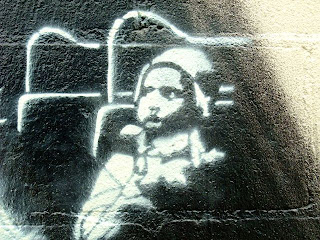 A close-up of the figure along the right edge of the above work. A child on a city train or bus. Those are the grab handles and outlines of the seats behind her. From the clothing it looks from long ago. Is this the same woman looking upon herself from childhood? 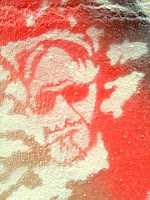 This artist signs his work with a self-portrait. Here his face is hidden in plain sight on the upper right of the chest of the woman's figure. 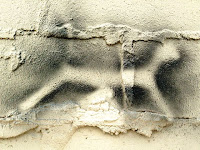 A simple animal outline, also a stencil. This reminds me of a version of the white chalk horses that have been found in England. 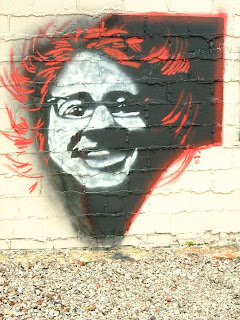 This jubilant head with red hair is also by the "Master of the Triangles" If you look closely, you can see his face/tag along the lower edge of the black square, just to the right of the face, even with the lips. Here there is a black square behind the head. Is that a blackboard? Is this a happy student or teacher? 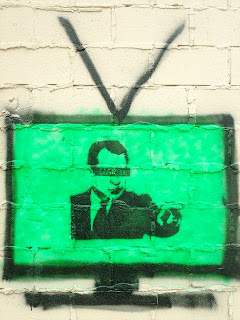 The return of Richard Nixon, this time in a TV's green screen. The image appears to be from a press conference, with the pointing finger probably singling out a reporter. 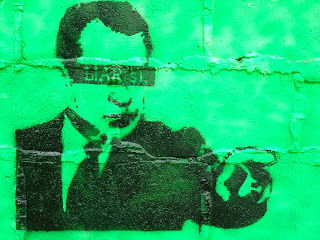 Here's a close-up of the figure so you can read what is over the eyes.... 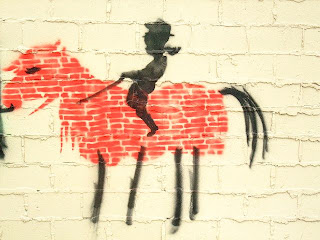 A child-cowboy on a horse, the whole image in a style looking as if a child drew it. The body of the horse done in bricks, perhaps a self-referential signifier to the graffiti's location.

This was a series of well-conceived and executed graffiti. I'm glad I was able to find and save them in time.