Organic forms in ceramics are to be expected. Clay comes from the earth, was used to hold food and water stores for a very long time, and is directly formed by human hands. Organic forms often slip into a lot of work with more geometrics. Thirteen thousand years old., the medium spans half the history of modern man in its utilitarian and art guises.

In Patricia Sannit's "Tower", over a dozen disks are stacked vertically. Many have markings along the edges, annotations on the horizontal plane that are shifted into another dimension by their verticality. Shorter cycles and longer ones.

Mindy Solomon has consistently brought first-rate emerging and established ceramics artists from around the world to the Bay area and art fairs. In Organic Inhabitants, the work of David Hicks and Patricia Sannit are brought together.

On the left is "Flora, Dark Bloom" by David Hicks. The forms are engorged with fertility and life. They reach out to the light, engaged in a phototropic slow-motion choreography, a sensous sun dance concentrating light, water, minerals into a brief, shining moment of life.

Both artists have a close-to-the-earth awareness. For Hicks it draws from agricultural proceses and cycles of germination, growth, maturation, fruitfulness, decay, and a return to the earth, primal stages for everything that lives. Patricia Sannit is connected via literally digging into the earth in archaeological sites. She told me at the opening of the show about a specific moment during a dig when she unearthed an artifact, and a moment of illumination followed, things coming together in her heart and mind, revealing a connection that would unfold into her future.

The agricultural cycles have deep connections to human culture and is analogous to human life cycles. One thing that is evidenced in the work is the fecundity of plants. In the hanging "Still Life" series, gourd-like swollen forms (which also edge out into other forms, all organic) hang heavy on steel cables from the wall, like harvested crops.  The other forms, floral, fruit-cluster-like forms project strong reproductive power underscored by mortality.

Patricia Sannit's work is about continuity, human evolution and exploration of forms across time. Tens of thousands of years of human lives engaged in the mysteries and revelations of forms and time. Our perceptions and attempts to grasp time, to use geometry to see the invisible, store and transmit feelings in an archaeological context, are expressed in these fictional artifacts made during the artist's life & about the layering of hundred of human generations. Sustained exploration over many human cycles. Her glazes give the impression of ancient markings and unearthed forms. In "Helios I", on left, note how the circular form is broken up into calendrical markings in four (seasonal?) sections.


Sannit also incorporates megalithic tropes downsized into her work. Most will view "Tidal Pool" from above, where it has a bowl/pool like form into it, also marked with various triangles, etc. harkening back to humanity's early days as beach bums. On the left is a side view from tabletop level. What looks like "legs" for the form bear a similarity to a type of megalithic structure called a dolmen, where a large cap stone is held up by a trio of vertical ones. 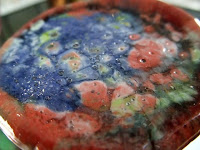 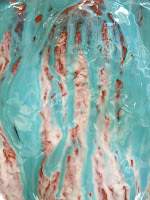 I spoke with David Hicks about his work. One of the things we talked about were his glazes. Although he is fluent with glazes, he told me he is not a glaze chemist, but deliberately experiments, reaching, trying new things.


The curator juxtaposes these two artists wisely in terms of the medium, but more so conceptually. Both address somewhat similar concerns, through cycles and different kinds of continuity, the biological and cultural. Something any living/mortal creature can take comfort in.

Congratulations to artists Hicks and Sannit, to Mindy Solomon for hosting and curation, and to her crew for a good show.

Mindy Solomon Gallery is located at   The show runs through Sept 8th. Admission is free.