This was the MFA show at USF's Contemporary Art Museum. The show was unusually strong conceptually compared to the others. Since the artists were writing theses about the work, this is not surprising. 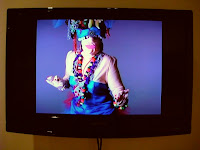 There was a fourth suit, not shown in this picture, titled "Nude suit", which, curiously, did not include a mask, like the ones pictured here. These suits by Francis Marquez are humorous but at the same time they seriously deal with issues of identity, masks, make-up/hair/etc., and clothes as a kind of secondary skin.


Ms. Marquez also had an accompanying video to go with the suits, showing herself wearing them and giving them life, dancing to music. The whole installation and video had a very light, airy feel at one level, while addressing more serious questions simultaneously at other levels.


On the right is a close-up view of a small part of the table. Note that some of the sculptures are surreal (like the homunculus in a wheeled bird skull), but many allude to farming and the industrial age as well. Silos, canals, small bridges, a man atop a wishing well, and much more. The title suggests too much analysis or thinking can lead to the work and/or what is shown in it.


Rob Fladry's video work shows a single frame from Gone With the Wind juxtaposed to one from The Godfather continually changing. Two films about vanquished cultures and families of survivors. The effect of the dual video is to construct a third, purely visual narrative in the viewer's mind, one that does not exist in either of the donor movies.


Jordi Williams' "Universal Alignment" consists of a large tricolor sugar substitute  mandala [Link] in a slight spiral pattern. Suspended via monofilament fishing line from the ceiling are several fishing pyramid type sinkers, painted white, ever-so-lightly touching the sand. The artist says the sinkers "...map the intersection of every Ley line in the Western hemisphere". Ley lines are explained here: [Link]. I'm not entirely convinced, but it is a stand-out installation.


Ryan Foster had a series of hyperreal oil paintings based on various contemporary themes of the post-industrial age, like Books, Behind That Big Red Curtain, Religionists Hate the Future, and several others. These works had a great conceptual and stylistic coherence in a very individuated manner.

Rob Monroe's"501, 310, 077, 972 MMWR, 2011" is a sculptured in the form  of a male human figure from hand-cut fiberglass and covered in polyurethane. It looks like it is covered in armor, and in a somewhat alert, defensive pose. The lighting is critical to this piece, in that its shadow is significant to the work.


On the left is Ellen Mueller's "Waiting Room", an installation looking like every generic waiting room that ever existed, complete with a plant (fake-looking, but I didn't check), magazines, inoccuous painting on the wall, and the TV, which showed videos made by Ms. Mueller whose scripts come from survival manuals. The woman doing the narrating and demos is reminiscent of a stewardess, and incredibly funny in a very understated/straight way. Ellen also had a series of readings from her "Book of Enid", which was a story and drawings of a woman who tries to go back into the past and prevent a disaster from happening. There were cards from the Book of Enid by the magazines. The artist also recruited people to populate her installation, which when I came in, thought was a real waiting room!


Congratulations to all the artists in the show, and those reviewed here.