Pareidolia was the theme of this show at the West Tampa Arts Center. For one definition see here [Link]. The official one was the provocative theme of the show: "the the real, dark and otherworldly". I had the pleasure of running into WTCA Director Maida Millan and BoD member and premier Tampa Poetess Silvia Curbelo at the show.

The West Tampa Art Center is an old cigar factory building on Armenia in Tampa that was rehabbed into a furniture business on the ground floor, and artists' studios above. It is one of the roomier venues for the arts in the area. Many of the artists also open their studios to visitors whenever there is a show, so the viewer's experience is expanded and varied. 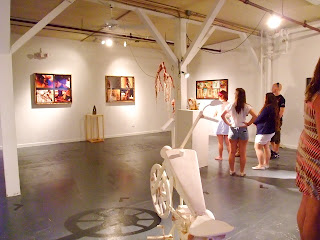 On the right is a view of the main gallery at the WTAC. This is where the show was held. Keep in mind that the building has very spacious hallways whose walls are also used to display art, giving the space a lot of potential for large exhibitions.

A quadtych photograph by D.R.S. of branches, sticks, logs and things one would find around a cabin or logging camp, with a snowy backdrop.  The various forms of the wood and their function, from the natural to the harvested and trimmed form still carry traces of its origins.


Don Compton's "Decomposition I" is a large (about 3.5 x 6.5 ft) sculpture with a metal "skeleton" and a porcelain head, looking like the remains of a large predator after its soft tissues have rotted away. No longer threatening, only a remnant of what it once was.


On the left, another Don Compton sculpture, "Ride it like You Stroke it", a play on the common saying. A ceramic and metal life-size sculpture of a Harley that attracted a lot of attention. 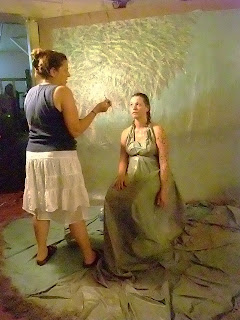 At the space by the DJ stage and entrance to the main gallery space there was a performance involving a face-painting against a matching backdrop.


On the left, one last Don Compton sculpture in the form of an American Flag made of spent shell casings, titled "Foreign Policy", an openly political and dark work about current national reality.

Keith Parsons' "Untitled", depicting an elderly woman who appears to be nearing the end of her life, along with other older pictures from earlier days, shows what most of us are loathe to confront, the eventual decline of our bodies and minds. This is not an easy thing to do for many reasons, but it was handled extremely well in this instance.

Ms. Koufas-Eisbacher's "Stairway to Hell" involves a bit of fashion, voyeurship, religion, and a little modeling mayhem. One of the things that makes this triptych work are the flip-flops between positive and negative in the panels.

Jill Corey-Katz's work in this exhibit is at one level, a personal documentation of life as an addict -- as a participant. I spoke with Jill about her work at the opening, perhaps unfairly comparing it to Nan Goldin's work. These pictures are in the snapshot style visually, unlike Goldin's, which are more conventionally formal, but conceptually, they are like Ms. Goldin's, in the sense that these are snapshots, in many ways like the ones people take of their families, and, like Goldin, she includes herself in at least some of the pictures. This was Jill's family at the time, and as such they are loving mnemonic fetishes of her loved ones, events in their lives, etc. No, they do not look like the average family album pictures, but think of this: In the most trying conditions, people cluster together, form relationships, however tenuous, and these pictures are, in spite of their darkness, a strong affirmation of life. They are honest, free of affectation, and insightfully contemplative.


Congratulations to WTAC, Maida Millan, and all the artists for a memorable exhibit.