Creative Clay (CC) is an organization that enables local artists with developmental, physical and emotional disabilities to make, show, share and sell their art. I ran into Calan Ree at an art opening, and she invited me to come by and see CC's aptly titled Good Folk exhibit.

Upon arriving, I was shown to a back working studio space with a series of tables connected end to end, where a dozen or more artists were absorbed in their work. Calan showed me the painting on the left, done by Robert M.


It was a group two-part show. On one side were portraits of CC artists done by local artists, and on the other wall, works by Creative Clay artists. Here are a few of the portraits of the CC artists...

From Matt Deterior, who recently left the Bay area, a dynamic portrait, brimming with life energies and surrounded by jiggly hearts. Matt's ability to depart from convention, his tribal, heartfelt style make for a strong portrait. 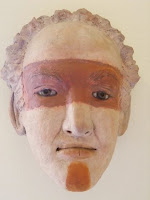 On the left is Calan Ree's ceramic sculpture "Portrait of Lawrence J". Her  work has been reviewed here several times. I met Lawrence recently and can say that this is a beautiful and insightful portrait of its subject. 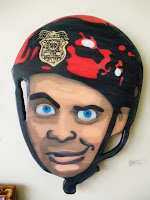 The "Portrait of Steven S.", by Chad Mize, done in acrylic resin on wood, is an interesting combination of realism and somewhat pared down features, emphasizing the gesture of the subject.

On the Creative Clay artists' side...

"Woman", by JJ H., at first glance looks very abstract/unreal. It is a portrait of a well-known St. Pete artist and muse. A fantastic interpretation of her, body and soul. Out of the box, over the top, and spot-on. Even the background articulates with the figure well.

Rita L.'s "Pale Melissa in Japan", a figure dressed in yellow with what seems like Mt. Fuji in the background on the left, a full moon, and a cherry blossom tree in bloom. The painting has a fairy-tale quality about it. 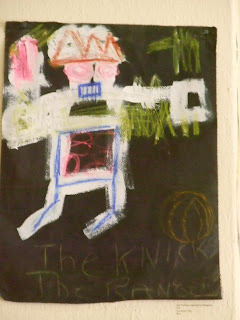 On the left is "Self-portrait inspired by Basquiat", by Clarence. Basquiat's influence is clear, though Clarence has synthesized it into his own style. The figure seems to be wearing a crown, wielding a (flaming?) sword and a shield. Note the x-ray vision of the body.

This portrait inspired by Gauguin, by David S. caught my attention because it was inspired by late Gauguin. The Van Gogh influence in Gauguin can be seen, along with the muted palette and gesture.


Congratulations to all the artists in the Good Folk show, to Creative Clay and to Calan Ree for being a perfect hostess.