The second part of this show was held at the Creative Loafing Space above the Spaghetti Factory, in  Ybor Square. 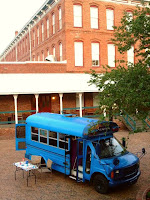 Parked outside was Mitzi Gordon's Bluebird Book Bus, looking good against all that red brick. I keep running into the bus everywhere I go, most recently in St. Pete at 620.

I talked with Becky Flanders about her work on left, titled "The One!". It is a sensuously organic presidential seal, sans the eagle, done on paper with graphite and watercolor. The outer ring in pink, perhaps feminist? The thirteen stars haloed by golden rays, and on a scroll, "The One!", a commentary on the process of distilling down to a candidate and the illusions that go with that.


"Profit/Tears" by Bradley Arthur, who makes socio-political art on a regular basis, even when there's no conventions in town. A conceptual sculptor, this type of work is something he continues to explore. Welded words and shadows of words as subtext.

"Politics and Propaganda Series", by Christopher W. Weeks shows what seems to be a political prisoner wearing an American Flag hood, his hands tied by wire (?). Superimposed on the image asks "is this america?" in red-white-and-blue. Below is the First Amendment and how restraining protesters makes a sham out of that. 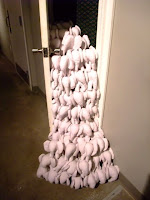 David Gabbard's "Rationalization" is a door and frame set into a wall with a cascade of elephants coming out of the closet. Out.of.the.closet. 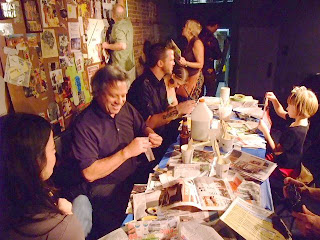 In a stand in a corner, the collaborative collage started at Tempus Projects under the Silverfish Project continued on a smaller scale. On the left, grinning is Bradley Arthur. 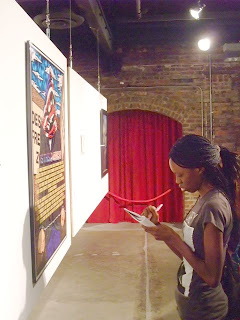 Congratulations to Creative Loafing for a good show.