Looking out a window in a dark, unoccupied studio, back on May tenth 2012, on the opening night of Moira Shiver's debut show at WTCA, we had a conversation in part about the then-upcoming RNC Convention and how to approach it as a gallery. Four months later, the show Common Sense had become a reality.

Designed to show "the voice of the people", the exhibit showcases the work of many artists in a variety of media. There are many works that are direct, perhaps blunt in a propagandist sense, but also many that are more complex.

The Ligorano and Reese work has already been reviewed here [Link]. Here's a few highlights from the exhibit at the WTCA.

Many artists make works specifically for a particular show, often around topics they otherwise rarely touch upon. This is a natural and accepted practice based on demand characteristics and market forces. Bradley Arthur is no stranger to this theme (among many others) of socio-political commentary.

Bradley Arthur is a sculptor of international stature, a yoga instructor, and has fought for artist's rights. His work in Common Sense is conceptual in nature, as in "Your Move". Made on chalkboard, it is basically a game of tic-tac-toe, with earths and crossed ICBMs. The game is at a stage where it is soberingly clear who will win the game.


John Gurbacs' paintings are in local museums and in collections around the USA. He has addressed social issues and often contrasts natural with man-made forms. One of the outstanding qualities of Gurbac's work is the high quality of his painting. "Iceburg", an oil on canvas, is a two-part composition. Just below the horixontal midline, there's an image of a car on the road. Note how there appears to be a ripped-out part along the lower right of the painting. That is also painted, deconstructing the illusion of realism -- and commenting on the car itself.
The upper part is an iceberg, with a schematic of a car in yellow layered over it.

"Apple Pie" is a parable about American class inequality using the national dessert to show it.


Mishou Sanchez, whose work has been reviewed here many times and recently, is an architect and an artist. "In Freedom Yell", shown at left, the bust of a red-headed young woman in a three-quarter view (in olive drab?) holds her hand to her mouth and yells "Freedom!". The style is reminiscent of Russian Constructivist photography, a style popular between the end of WWI and the 1930's [Link]. One of the fascinating things about Ms. Sanchez' work is the tension between her strong sense of design and her considerable passion. The field thus created is an energized, mercurial space for her art to generate a range of possibilities . 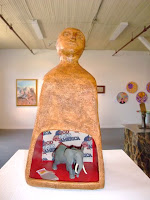 On left, a mixed-media sculpture, Susan O'Hara's "State of Affairs" consists of a clay torso with a cavity at its base. That cavity is papered in back with a red, white & blue "God Bless America", a small elephant and a tea bag visible in the lower left. The face on the figure looks agonized.

Ernesto Piloto-Marquez has been reviewed here before. He is one of those rare artists who can seamlessly meld words and images in an equal and riveting manner. In "Sacred", shown at left, a female figure in white sits on a red chair. Three snakes are visible, one wrapped around her.  She holds a heart in her lap in a stylized gesture. Above the upper edge of the frame, a fence and a house. If you click on the image it becomes large enough to read the background text, which is basically saying that what can happen is up to us.


Congratulations to all the artists in Common Sense, to the WTCA, the jurors and Moira Shiver for a good show.

"Common Sense" has been extended and will culminate with a Closing Reception from 6 - 10 PM on Saturday, September 8th. All at 1906 N. Armenia, Tampa.