Hunter Payne is an art personality and an artist. Known for his Drawing Underwater project, which was finded via Kickstarter, he has done a book [Link], funded the same way, titled Congratulations, You've Been Selected to Win Another Day on Planet Earth. He raised the $1,000 for the project in under eighteen hours (!).  He is a natural for Kickstarter, with an energized, extroverted,  fun personality that extends into his work. 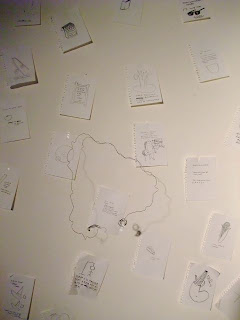 The work in this launch party consists of line drawings done in a sparse and witty style, some rich with irony. The drawings on the walls were originals that didn't make it into the book, and there were scores of them, from the ceiling to floor level. Viewers could choose drawings, take them from the walls and pay by putting money in a container. Payne's ebullience and zest for life comes across clearly in his art, and was contagious at the exhibit. In the middle of the room, spotlit was a shredder, where one could run pictures from the wall through it (!).  People did this, and Hunter and friends played with the shredded bits. There were two tables with microphones set up that supposedly only worked when one said nice things. 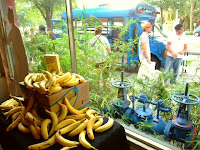 Outside, there was Mitzi Gordon's Bluebird Book Bus with panels of paper where one could write poems and a typewriter on a table where one could do the same. There was also a large supply of chalk for those who wanted to draw on the sidewalk.

Balloons littered the interior of 620, with people bumping them into the air or stomping/popping them. A large table at the back was piled high with copies of the book and stickers. It was a blast of a happening, and people really enjoyed it.

While watching all this, I thought: What a fantastic art teacher Hunter would make.


Congratulations to Hunter Payne, Mitzi Gordon and 620 for a wild afternoon.