Robots hold an increasingly share of cultural attention as we get closer to the singularity [Link]. Artificial intelligence will eventually approach at least some of our own capabilities and eventually  surpass them. The singularity will be preceded by what is referred to as the uncanny valley, the point where robots get close to us, and seem creepy. As the technology continues to evolve faster than the culture's ability to deal with it, art is on the front line of this frontier. The St Pete Robot Exchange's "Artofficial Intelligence" show at the Sake Bomb bar is a good example. 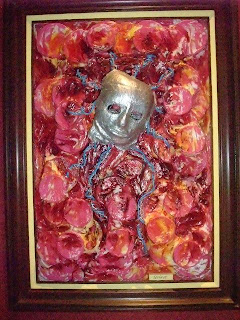 One of the problems with this show (and many others in this area) was the lack of clear labeling. This work was unlabeled on opening night. A silvery robot face or mask with tendrils extending into the organic, cell-like background.

Nikki Devereux is a fashion and portrait photographer and artist. In the mixed-media work at left, the blinking eye of HAL 9000, the archetypal disobedient psycho-computer in the Kubric movie 2001: A Space Oddyssey shines in the upper right, lording over the space in the picture. There's what seems like a poem below HAL's eye, but I couldn't make out what it says.


On the left is a digital composite photograph of a local skyline with a large robot looking down onto a skyscraper. Perhaps Aurelieus is commenting on cyber-tech becoming taller than the material world. There were smaller Robots by the same artist perched on the light fixtures (on right) like gargoyles. 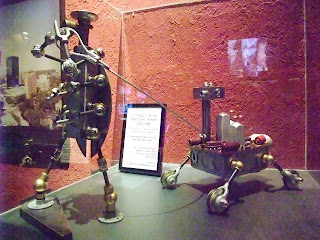 Sarah Thee Campagna of Cybercraft Robots, whom I often refer to as Queen of the Robots, showed "Roach Bros. Martian Rover Salvage". A roach-like robot tows one of our Rovers with a cable. Sarah's sense of humor extends into the advertising, saying the business is open 24.6 hrs/day, 669 days/yr. Martian time. The pair looks like a human walking a dog. 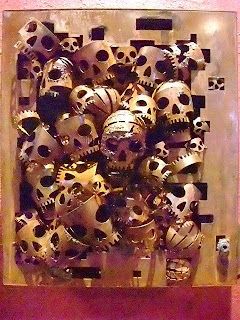 While I was looking at this piece, another artist remarked that Frank Strunk III was "getting too big for St. Pete".  This work certainly gives that impression. A series of metal skulls inset into a metal box. On one side there's a metal handle. Rotate it and several of the skulls silently laugh at you, their jaws clacking lightly. A human-powered Naturae Morte. The robots (if not death) will outlive us. 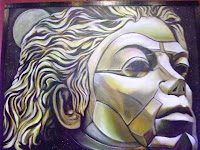 This faceted silvery head by Derek Donnelly with its stern, intense countenance and subtle coloring is more cyborg than either man or machine. Beautiful, too.


Congratulations to all the artists for a good show and to the Sake Bomb for hosting it.