The State Theater at 687 Central Ave. in St. Pete is a popular alternative music venue of long standing in the community. Behind the building is an alley. On the backside of the Theater graphic illustrator and artist Chris Parks, who owns Pale Horse Studio and Tes One, who defines himself as a traditiona./digital graffiti artist and graphic illlustrator collaborated on a mural. It is big and graphic enough to be clearly visible from 1st ave N. They designed it, then it was projected onto the wall and painted by the Vitale Brothers.


As with most St. Petersburg mural collaborations, there's little fusion of the styles of the artists. The result  is like two juxtaposed works by two artists with some attention paid to where they meet. Chris Parks  did a snake and a rose. 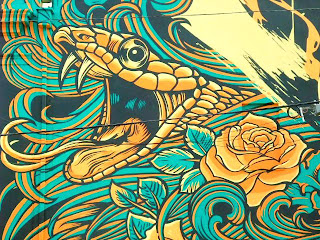 Tes One did a partial abstraction and the head of a woman, very similar to the one he did in the Graffiti Show at the Morean. 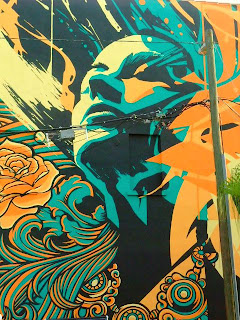 Congratulations to Chris Parks, Tes One, the Alvarez Foundation and the State Theater for this newest addition to St. Petersburg's growing family of large and legal street art.