The Morean Arts Center is a collective of artists of every stripe and level of experience. It's an exhibition space, educational institution and much more, including a cafe. Once a year it showcases the work of its members with a juried show. This year, the judge was Creative Loafing art critic Megan Voeller. 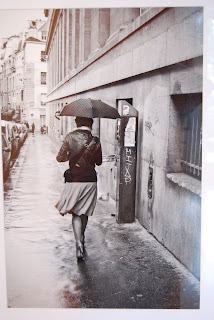 There were over 200 works and artists in this show. A huge variety of media, skill levels, themes and styles were included. I can only show a few works here, by no means representative of the show.

"Rainy Day in Paris", by Khalid Hameed on the left, is a street photograph of a woman with an unmbrella walking on the sidewalk. The sway of her skirt makes this beautifully printed image.

Sarah Thee Campagna/Cybercraft Robot's "Corvus, Star Ranger". Like all her robots, Corvus carries an accompanying narrative. They're machines created in our own image, down to gesture and foibles. 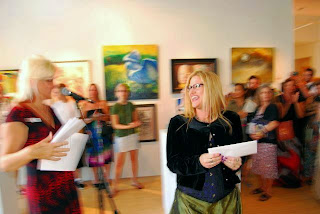 Here is Sarah receiving her Mark Pheiffer Memorial award for Work in Metal from Amanda Cooper, Curator at the MAC. 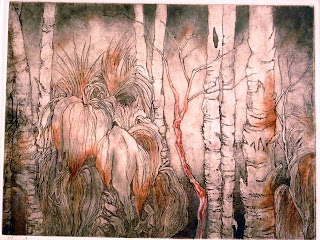 This beautiful, moody monoprint by Debra Mixon is titled "Stand". Probably named after a pine stand, though it clearly transcends what it depicts. The sfumato background has exquisite tonalities. 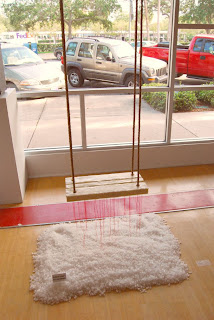 It was a welcome sight to see a Kim Radatz mixed media work at the MAC show. This one is titled "Letting Go". It consists of  a swing with a white seat and the usual Radatz dangling red strands below it, above rock salt. Suspended time, loss, spirituality, passion and tears came to mind.

Wade Slater won best of show with "The Sun Also Rises", seen at left. Made of wood and clay, this is a loving hommage to Ernest Hemingway.

Congratulations to all the artists, Megan Voeller, and the MAC for a particularly good member's show.