An evening at Duncan McClellan Glass

Duncan McClellan's Castle-like studio (an ex- fish-processing factory) is beautifully converted into a unique, elegant home, social and working space. [Link] Once a month, on the evening of the 2nd Saturday Gallery walk, there's a party and accompanying show.

Joseph Pozycinski and his wife Georgia collaborate making these beautiful sculptures. This one is "Nautilus Box". He started out as an engineer, and she as a marine biologist. As artists, they initially worked in wood and clay before incorporating bronze, other metals and glass. They currently reside in Sparta, Missouri. I had the pleasure of talking at length with Joseph at this opening. A friendly, outgoing man, whose laid-back demeanor and intense devotion to the work, including making special tools and processes is rare.


Each of the Pozycinski's brings their own insights and skill sets to the work. Georgia, I was told, chooses the animals and Joseph is more concerned with the formal aspects of the work, the whole being far greater than the sum of its parts. The combination of biomorphic forms between the animals and twigs/branches with the pure geometries of the glass is stunning. One theme we see in "Heron Bowl" runs through several works, and that is the pairing of creatures and the nesting of eggs. 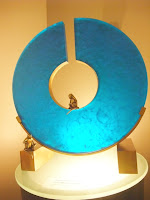 On the left is the Pozycinski's "Two-Monkey Sculpture". Like most of the others, this is made of pate de verre and bronze. Pate de verre is the making a paste of glass that is applied to the surface of the mold, then fired. The big advantage to pate de verre is that it enables the artist to control the precise placement of particular glass colors in the mold, and this is one of the things that stands out with these works. In "Crow Boat", below, we see what could be a funerary boat, carrying a load of eggs and guarded in their crossing by three vigilant crows.


Carrie Jadus is a self-described narrative painter. Her images are encoded with stories. On the left is a portrait of  aviatrix Amelia Earhart. We all know her story, and here is also the metaphor of the perils pioneering women face in any endeavor, including crashing/getting lost and disappearing. This is a relevant theme for our time. Jadus' work has a strong decorative component and is beautiful as well as telling a tale.

Roser Park is one of St. Petersburg's hidden gems. It is a neighborhood tucked into a ravine (yes, a ravine in St Pete). It was built in 1911, partially on Tocobagan Indian mounds by Charles Roser. Here, Ms. Jadus has painted a portrait of the man through a rendering of his creation.


This is one party well worth going to, because of the current exhibit, the everpresent first-rate McClellan glass works, those of others in his stable, and most of all, the people.

On the right is Christian Zvonik's "Know Your Audience", just one example of the strong work that Duncan's gallery represents.

There were large photographs by Jamie Baldridge, rich with psychological and alchemical symbolism. 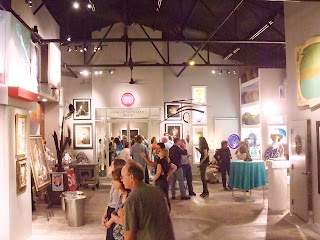 Then there's the party. Gallery owners, artists, collectors, gallery goers, and fascinating people of every stripe frequent these parties. 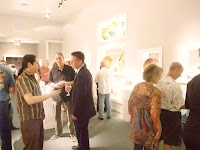 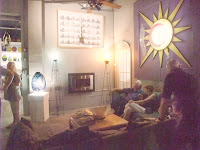 The space is unusually elegant, true to its industrial roots, and perfectly amenable to socializing.

Congratulations to Duncan McClellan Glass for a great show and grand party.