I was talking with Kathy Gibson, HCC Dale Mabry Galery 231 Director at Tempus Gallery, about Chicago artist Tracy Dear's Agua Luces project, which involved lighting five bridges, in time for the RNC convention. I had driven past those bridges, and craned to look. Meh. I told Kathy I wasn't impressed. She remarked that they look really good to her. 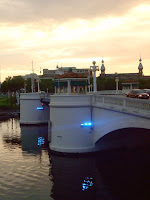 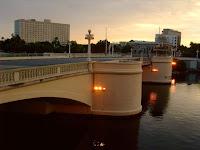 A closer look was in order. I started at the Kennedy bridge, a little too early in the evening. The LED lights were overwhelmed by ambient light. I walked on towards the Bay.


The sun had dipped below some clouds by the time I got to the Brorein bridge via the new section of Riverwalk. In the shade, the lights were beginning to work their magic. 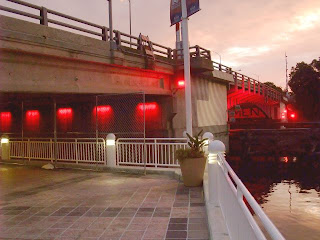 Keep in mind that these LEDs are turning from one color to another, blue, lavender, red, etc. This shifts the feel of these large structures constantly. On the left is the same view as above, only a minute later.


The Crosstown is also lit. From the ground, this tall overpass bridge looks much bigger than it used to. Against the evening sky, the view is stunning. 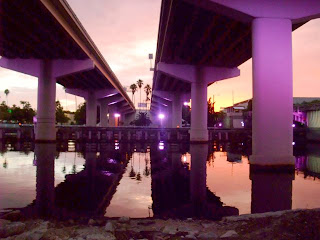 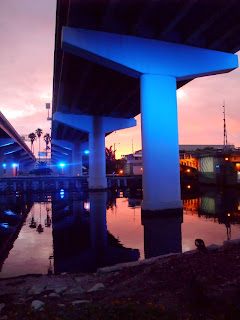 The Platt Street Bridge is low enough to the water to see plenty of light mirrored on it. This is from the Convention Center. The light bars on the right are projected onto the bridge. 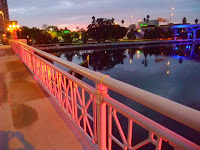 Some of the light gets to the topside of the bridge, lighting the hand rails. 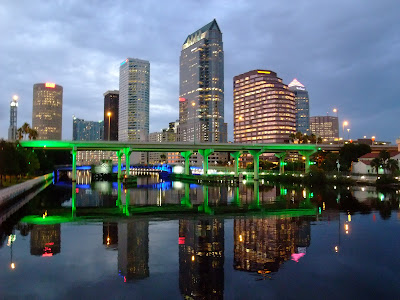 This is looking back at the Crosstown overpass/bridge from the Platt St. bridg, with the City lights in the background. 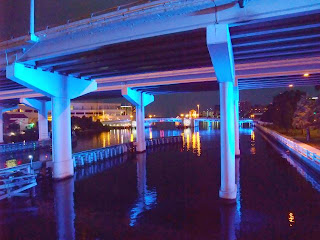 This view is looking back at the Crosstown from the other side, with the Platt St bridge behind it. One can see the shifting from blue towards purple as the lights change. 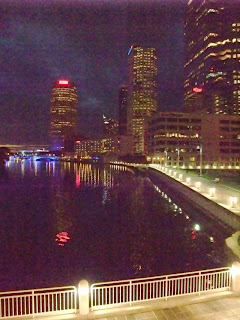 Here we see the new Riverwalk section, looking back at downtown. About midway up the left edge, one can see the Kennedy Bridge lighted. It is a pity that there's chain link fencing everywhere, blocking the view. I had to stick the camera lens through it. 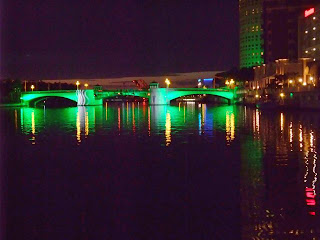 The Kennedy Bridge in a minty green. After getting close at an optimum time to Agua Luces, I have a very different perception and impression of this large work (and I didn't get close to the 5th bridge, which I will soon). Take time to explore this on foot (perhaps after things calm down around here and the fences are removed) and watch it turning colors. Riffing light off otherwise stolid metropolitan forms uses them as canvases and changes them. And it makes for a great and romantic evening walk or brief bike ride.