The three members of the Russian punk band Pussy Riot have been found guilty of hooliganism and sentenced to two years.

Yekaterina Samutzevich, Maria Alyokhina and Nadezha Tolokonnikova's sentence for their "prayer" performance in the Moscow Cathedral is drawing global outrage. Demonstrations have been held outside Russian embassies all day. 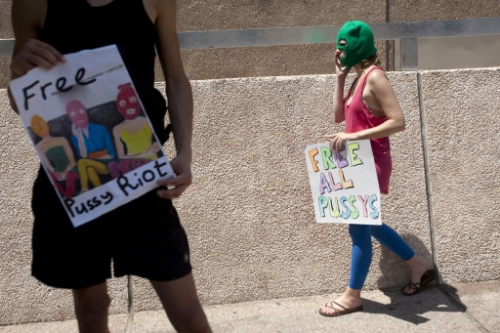 This protest was in Tel Aviv.

In the Ukraine, a topless woman chainsawed a cross in two in protest on behalf of Pussy Riot.

Putin has made an example of Pussy Riot, and odds are they will have to do the time. The whole world is watching as this open admission of spiritual debauchery and powerlessness from Putin plays out. Pussy Riot, we will remember you.