The Sake Bomb is a popular bar and an artist's hangout on Central Avenue in St. Pete. The gatherings tend to happen on Wednesday evenings. Saori recently had a birthday, and this show was originally to have been a one-woman exhibit. It was postponed and when rescheduled, Laura Spencer and Justin Runfola joined in the show. All three of them are friends and graduates of the esteemed Ringling School of Art.

The theme of the show is Hour Dreams. There is a palpable surrealist quality recontextualized into 2012 and tensioned between dream or mythic time and real time.

Saori, who is renowned for her and her crew's excellent installations in St. Pete, brought paintings inspired by a book of fairy tales she found.

"Yamashiro" on the left, is a symphony of curves, from the feathers of the bird, through the many levels of sky and earth, two circles and what appears to be a glimpse of clouds above.


Here Saori poses next to "Nestling". The title is in the singular, yet there are five blue birds visible. I heard that the story on which this painting is based has to do with not having children. Are we seeing the outside of the nest and that hole is the way in, or the other way around? The hole and the radiant sticks around it look like a portal to the unknown.

Justin Runfalo's work in the show is brimming with different forms of energies, tensions and dualities.  In "Deja Vu" we see a figure with dual aspects, with a gold-orange bolt of energy between them. The general effect is very dynamic. Justin told me the blue figures have to do with one's inner and outer selves as revealed with the deja vu experience. At the base of the figure is what appears to be a layered flower or cloud form.

In "The Temple" we see another energized figure, in this case literally aflame, consumed in an introspective reverie. On the right of the picture, a monkey at the top of a stairway looks on suspiciously (or jealously). As Justin pointed out to me, the foliage is an integral part of the formal elements in this painting, not just incidental scenery. The feel is otherworldly in a mythological way.[Link], [Link]


Laura Spencer told me her paintings in this show were illustrations of a narrative dream sequence. She refers to herself as an illustrator, which I see in the archaic sense of the word, meaning to illuminate, or shed light upon. This is the first in the sequence, Slumberland. The Sleeper awakens, connected via her hair, which is braided in the sleeper, but in the Dreamer is coming undone. The Sleeper is burdened by gravity, the Dreamer floats. The detail on the right is of the things on the night table, which prefigure other image elements in the sequence. Note the Naturae Morte in the fish bowl. 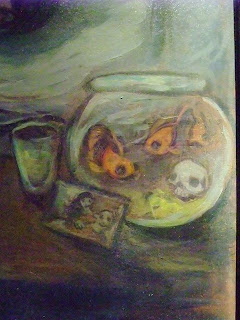 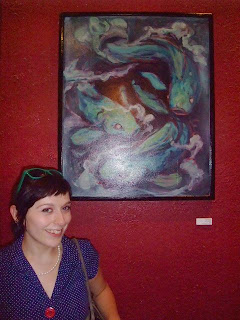 On the left is the artist, Laura Spencer, with another work in the series. Here the goldfish formerly in the bowl at bedside, swim freely and are ghostly or cadaverous. Ms. Spencer has done a great job with these paintings.


My only complaint about the show has to do with the lighting, which is inconsistent and miserable in places. The Sake Bomb is doing well with attracting artists and putting up competent shows, but the lighting needs to improve. I know it is not easy given how high the ceilings are, but it's worth the effort.

Congratulations to Saori, Justin and Laura for a strong show, and to the Sake Bomb for hosting it.