On Saturday, June 18th, the Cuban Sandwich Show staged its Taste of Tampa Passion at the Joffrey's Cafe on the edge of Centro Ybor's inner plaza.Originally it was supposed to be outside, but mercifully, it was moved into an air-conditioned space. It was still broadcast out into the plaza for those daring to brave the considerable heat. 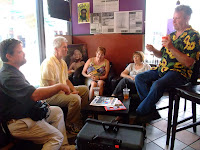 Poets gathered, greeted each other and talked... 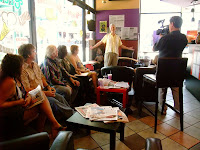 Richard Di Pietra performed part of his one-man play "I am a Cuban Sandwich", a wondrous oral/ living history of what life was like here just one generation ago, before all spaces were commercialized. People had less material goods, but lived full, richly textured and colored lives. 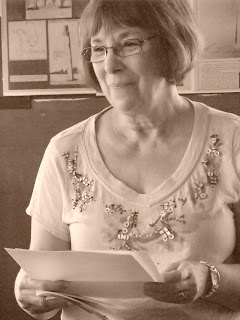 The poetess below (whose name escapes me, please send me a comment and let me know, I will insert it here ASAP) read from her extraordinary poem, "The Pastor's Wife". A complex and passionate poem exploring and questioning human and Divine love, the sacred and the profane. 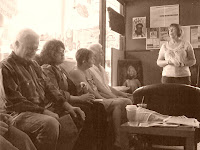 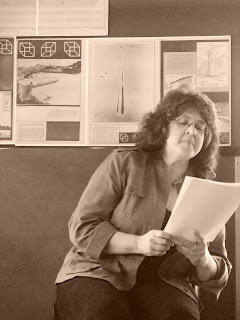 West Tampa Poetess Sylvia Curbelo read several poems, including one of her early ones. Behind her in this picture one can see the pages from past publications of poems David Audet pinned up on the walls decorating Joffrey's, and celebrating readings from long ago. 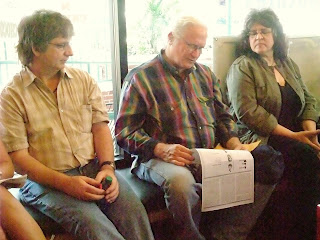 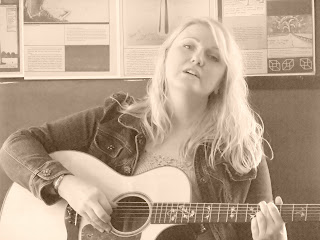 Stephanie Carpenter sang beautifully, specially the wistful song about being loved the way a beloved loved his guitar.

Congratulations to David Audet and all the poets who made this part of a spectacular afternoon and to Joffrey's for providing their space.