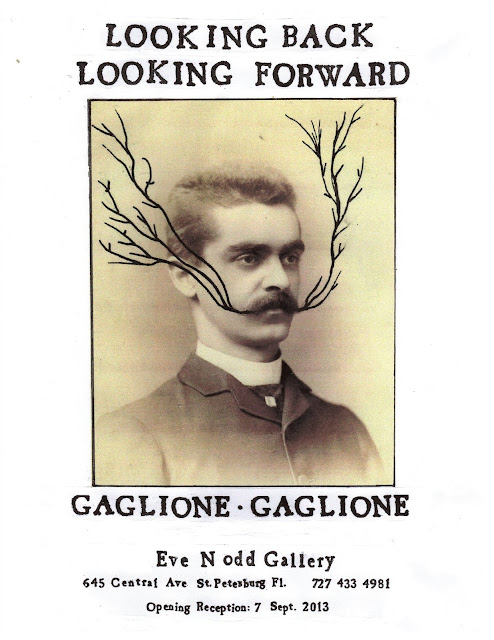 LOOKING BACK   LOOKING FORWARD
A New look for Old Photos
A show of works by Picasso Gaglione
Text: Darlene Domel
Eve N Odd Gallery 645 Central Ave St Petersburg Fl
Opening 7 Sept 2013
Picasso Gaglione created many incarnations and identifications during his long career as a conceptual artist.
He was one of the very early correspondents in the mail art network started by Ray Johnson and his work under the post name “dadaland” is present in catalogs and the documentation of mail art shows beginning in the late 60’s and continuing to the present day. A large body of his mail art work is part of the permanent collections of the archive of the Library of San Francisco, the Center for the Book Arts in Minnesota, the Getty Museum in Los Angeles, and the special collections section of the Art Institute of Chicago.
A fascination with all things Italian led him to the discovery of the Futurist Sintesi theater pieces in the late 50’s and ultimately to the performance of these pieces all through the mid 70’s and into the twenty first century.  His involvement with the Fluxus art movement in performance art is well documented from the mid 60’s to the present day.  He currently performs at art events in museums, galleries and art centers under the title “DADA machine FLUXUS”.
He began to use rubber stamps in his artwork in the early stages of his career and finally, in the late 70’s, taught himself how to make rubber stamps for his own use. In the early 80’s he and his wife, Darlene Domel, founded the fine art rubber stamp company, “Stamp Francisco” and became an inadvertent influence in the foundation of the rubber stamp industry.  For more than thirty years they have worked to encourage, teach and inspire others to produce and use rubber stamps creatively.
Gaglione offers a video tour of his very first “Rubber Stamp Museum, dating from the early 80’s, on “you tube” under the title “Abracadada Rubber Stamp Museum. They opened their first rubber stamp store in the early 80s in San Francisco. During this period Picasso also began the series of accumulation publications entitled “STAMPZINE” in which contributors were asked to contribute 75 hand stamped pages. He then compiled the pages and designed the covers.  All contributors received an issue containing these original art pieces and museums and art libraries regularly collected editions.
Picasso took this craft into fine art world in the 90’s with the creation of his “ StampArt Gallery”.  He decided that the gallery would exclusively exhibit the use of rubber stamps in fine art by notable international artists. He personally selected each subject and researched information for every monthly show. He designed a unique poster and catalog for each event. The gallery poster collection was recently featured in a one-man show in New York City and the catalogs are now part of the permanent collection of the library of New York’s Museum of Modern Art.
.
He is recognized as one of the earliest creators of art “zines’ and other limited edition art magazines beginning in the early 70’s.  He coined the word “Dadazine” to describe these works. He was an active participant in the development of the  “artistamp” concept and still uses his own antique perforating machine to create limited editions of his “Stamp Art” zines, the conceptual combination of both art forms.
One of Picasso’s most innovative creations is the limited edition box set. Each of these handmade box sets usually, but not always, contains a combination of his favorite art forms: a rubber stamp, a zine - often entirely hand stamped, and an artistamp sheet focused on a subject of some particular fascination to him. They are produced in very limited editions and succinctly reflect his rather whimsical perspective on some provocative and often obscure fragment of art history.
The works in this show contain a capricious collection of altered antique photographs bearing the unique “Gaglione” signature. With pen and ink Picasso carefully creates another layer of complex designs over the old images in a kind of dada art graffiti that transforms the antique into a modern, witty dynamic. He draws history into fantasy.
Picasso Gaglione never stops making art or discovering new ways to make art. Examples of his works can be found in private collections and major art museums worldwide
Picasso Gaglione and his wife currently reside in Lake Villa Illinois, outside Chicago.  He still produces a line of rubber stamps in addition to his other artworks.  He can be found actively corresponding with other artists all over the world via his  “facebook” page.
Ó Darlene Domel 2013
Posted by Luis at 3:26 AM