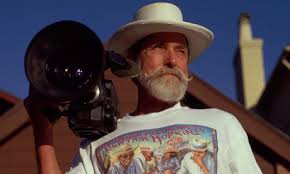 For those who love documentary cinema, this month of July is the Les Blank Tribute, being held in conjunction with the Cuban Sandwich Show. Les Blank who passed away recently was a world-class documentary filmmaker born in Tampa. No less than thirty of his films are being shown through July 31st at Grown Man Studios, a media production facility located at 6412 Central Avenue in Tampa. $5 admission. Last night the classic "Gap-toothed Women" was shown, also a 2nd film by Victoria Jorgensen about the Chinsegut film festival and USF's early film days. If you want to see what real non-corporate truly first-rate indie film is about, this is a rare opportunity for everyone in the Bay Area. Tonight, July 9th, it is "A Well-Spent Life", the story of famous Texas Bluesman Mance Lipscomb, and a 2nd film, "Sworn to the Drum", about Master Afro-Cuban percussionist Francisco Aguabella.

For cinephiles, this is a truly unique event in the Bay area. In the audience you will be rubbing shoulders with some of the top creatives on either side of the Bay. This is an event I can endorse without reservation.
--- Luis
Posted by Luis at 7:36 AM