Duncan McClellan understands the artistic synergy in collaboration. An artist that makes things happen, whether designing furniture for architects, sophisticated glass works and more, Duncan collaborated with Ernesto Piloto-Marquez in this show to produce a piece that was unveiled in the gallery.

Ernesto is a Cuban-born artist. Originally a pastry chef, he harbored dreams of becoming an artist, which he fulfilled a little later. His work is philosophical, reflecting on two of the big questions in art: Who are we? and Where are we going? The art is perfectly fluent in melding language with visual elements into complex, counter-weighted narratives, the main focus of which is being true to oneself. The collaboration is pictured on the left. That's Ernesto just to the right of the work, in the dark shirt. It was one of those collaborations where there's a genuine fusion of styles, with neither dominating the piece.

Piloto-Marquez did a surreal installation of upside-down open black umbrellas (reminiscent of Magritte) dangling from the ceiling, and one red one filled with chocolate cast in letters, for his concerns over language. Many viewers, myself included, helped themselves to the letters, communing with and ingesting language in a different way, integrating it with their being, just like his art does.

Piloto-Marquez' art is about individual empowerment. "Consciousness", seen here on the right, speaks to the duality of heart and mind. The faceless figure is transparent. We can see its brain, with its left side being enlarged. Below, a line from an electrocardiogram, showing the beating of the human heart, which is not visible. 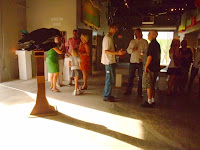 It was a warm evening, with the golden hour extending well into eight PM. People gathered in small intimate groups in the many nooks and crannies in Duncan's studio and home. A large, industrial-size fan cooled off gallery goers on the north deck. The deck on the East side was shaded and quieter.


One of the characteristics found in many of Piloto Marquez' works is projections away from the canvas, into three-dimensional space. Sometimes this can be very subtle, as in at least two works I can think of that have small shelves near the bottom of the frame, holding objects, and/or depicting a sub-level to the painting. Here it is in the form of an empty bird cage. A male and female figure seem to be contemplating it, and we see them through its bars as well. Are they empty-nesters?  The figures look too young. Perhaps they're contemplating a commitment to each other. The human soul is often symbolized as a bird. Are they going into the cage, or have they already left?


Sculptor Dale Rogers was the other featured artist in this exhibit. His work consists of large metal welded sculptures. Some are bright and shiny, others are of distressed metal. Almost all consist of bilaterally symmetrical components with a framed section, space or object. In "Away", on the right, you can see two halves that cradle (or release) a red ball in the upper middle. These are posh, highly decorative uplifting pieces. Beautifully designed and expertly crafted.


On the left, "Another Good Day" in the foreground (behind is Duncan's standing glass waterfall). A waveform with a polished circle of steel being pushed at the crest, holding a brick-shaped stone in its center.

On the right is "Angel", by Dale Rogers, a very totemic-looking piece about eight feet tall.


While at this exhibit, I ran into Girard Louis Drouillard, Mike Conway, Laszlo Horvath, Carolyn Cossar, Sarah Thee Campagna, Duncan & his girlfriend, of course, spoke with Ernesto Piloto-Marquez, and many other friends and made new ones.

A special note of thanks to JB.

Congratulations to Duncan McClellan Glass for putting together a great show, strong work, a successful collaboration and one of the best parties on either side of the bay.