At the National Rifle Association convention in 2000, Charleton Heston culminated his speech by holding up a musket similar to what the American insurgents used in the Revolutionary War to rout the Brits over his head, which Heston invoked, and proclaiming "From my cold dead hands". It was a reference to gun rights, or as Heston put it: "Those divisive forces that would take our freedoms away", and can be seen here [Link]  longer version here [Link]. On the left is a picture of Tempus Projects. The free-standing gallery is behind it.

Matt Normand was inspired by those words to do an animation by that title. His stated angle remains somewhat fuzzy and open to interpretation, but the basic storyline is that upon entering the afterlife, Heston is thrust into the Planet of the Apes movie in the character he played, Taylor, but this time he is wearing the same suit as when he gave the speech, and has no guns to fight the Apes with. He is defenseless, persecuted, imprisoned, chased and shot at throughout this apparently endless, looping stint in the afterlife. No gun in those cold, dead hands. The animation is silent, save for one instance where an ape fires a gun, and that was loud. Viewers would jump an inch off the ground when it went off. Music, jungle music, to be precise, was provided by Shannon, AKA DJ Eris whose music was flawless and enhanced the experience. She can be reached here [Link] or at 813.785.9115. The animation was done via the arduous rotoscope process. [Link]. Normand has an MFA in design, is an assistant design professor at USF St Pete, and an award-winning design for his work in video production.


There were several projections and monitors playing the animation, both in and outside the gallery. On the right is an image of the two outside screens and some gallery goers relaxing.


This installation was like a Tibetan Video of The Dead Heston [Link], his predicament being like a course through the bardos or stages of the afterlife. It is an ambitious project, and some of it, while fine for an art animation, is understandably a little rough/crude compared to corporate production values. The effect as one wanders from screen to screen to monitors was more than a little disorienting, and in parallel, the viewer's own passage through the afterlife.  It's not just about the NRA and Heston, but the viewer, too. 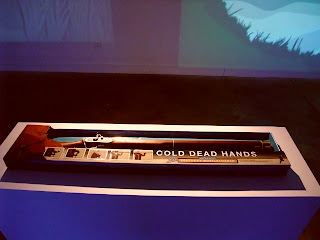 Below is the centerpiece of the show, a musket like the one Heston held up at the NRA speech, packaged in a toy-like box, with the "Cold dead hands" inscribed prominently on it.


Congratulations to Tempus, Matt Normand and DJ Eris for a memorable show, and a daringly ambitious undertaking.