We speak and make sense of our world in stories. This Cuban Sandwich Show event, "Remember When?", was all about that, remembering the past, understanding it in the present, and letting its lessons help guide us into the future. The "BS session" Masterclass  was held at King Corona Cigar Bar, a tawny aromatic cigar smoking parlor and bar at 1523 E. Seventh Avenue, Ybor City.

The cast of 'oral historians' included Don Barco, owner of King Corona, Cigar Pro and "Biggest Mangoes in Town" Joe Howden... Musician, reporter and City Liaison to Hollywood Paul Wilborn... the audacious David Audet, original Artists' & Writers' Ball member, HCC dude, artist and Maestro of ceremonies of The Cuban Sandwich Show....
...a suspiciously quiet Tampa Historian whose name escapes me....We had no less than two of the three "D"'s a fascinating couple, the better half of which, a schoolteacher, asked great, incisive questions...Antonio Alfonso from Alliant Partners...Tampa Photographer Lydia Sessions-Gottardi...several others who drifted in and out of the circle, and yours truly. 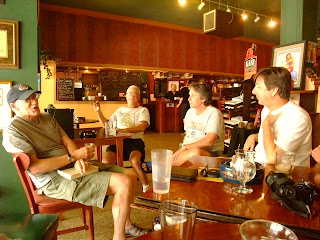 This is the historian (on the left) in one of the rare moments when he told us a story. The schoolteacher and her husband are in the background (if anyone knows their names, send them into the comments and I'll insert them ASAP), Wilborn on the right. The talk was eclectic, but centered on Ybor and Tampa, and covered an astonishing range of time and topics. I was thinking that all these people, like me, must be fishermen at heart...

I sipped on my huge cafe con leche, listening and ocassionally telling one of my own... There were stories about early Ybor ('twas a swamp), Bolita Kings, the economic heyday of Ybor, The Fall, what life was like (a lot like what actor/poet Pietra tells in his "I am a Cuban Sandwich" one man play), a debt repaid to a child for over seven decades -- in cannolis,  the pre-American Union Labor ... ...progressives  of Ybor, the Cuban and Italian influences, the ghost-town days where you could have slept on 7th for a couple of hrs without a chance of being run over(!). Speakeasies, where the counterfitting presses are still buried (don't ask!), the days of cheap no-AC apartments populated by artists. Chusmas. Living in huge lofts, big enough to bicycle in, that are now bars. Lofts where artists like Rikk Traweek, Ric Melby and so many other great Tampanians created some of their best works.

These are the dreams on which this city rests


Joe Howden treated us to one of his Royal Howden of Ybor mangoes, a true rarity, and one-of-a-kind mango tree he has. It's registered with the official Mango er...registry. Having had a lot of mangos in my time, I have to report that Joe's is by far the best ever. Simply exquisite.

The talk drifted to the future of Ybor, Guavaween, and what the future holds. It was a superb, edifying afternoon with a wonderful group of cultured, highly individuated and unusual suspects, one we should definitely do again. And I discovered that a cousin I thought was long departed is still alive at 91 and living in Ybor.

Congratulations to David Audet for an idea well done, to the gracious and cultured Don Barco for hosting the event, to Joe Howden for Best Mango and his great hospitality and generosity, and to all of the participants for the tell, and passing on the pearls. Thank you. We must do this again. The idea of a Salon was mentioned, and for the record, I'm in.