The Scarfone/Hartley Gallery is showing the collaborative work of Carol Mickett and Robert Stackhouse, in an exhibit titled "Crossing Bridges". It is part of University of Tampa's Guest Artist program, wherein a series of prints are created in UT's Studio-f and exhibited in the gallery.

Long-term collaborations are relatively uncommon in the art world. Their first collaborative work I could find in their resumes was in 2001, making this partnership a decade long. Stackhouse has the national credentials as a sculptor , though he trained as a painter. Mickett has a PhD in philosophy, credits in academia, is a poetess, wrote for newspapers, and has a radio show. 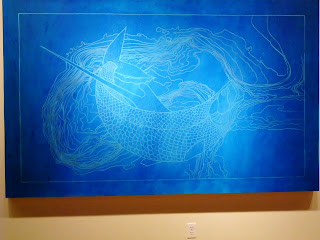 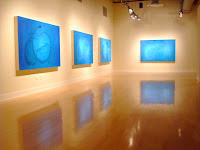 On the left is one of the "Aspects of Identity" a quartet of paintings, acrylic on canvas. This fish is one of their core motifs in this series, but it's not just any fish. It's a Tarpon, AKA "Silver King", the area's most  prized game fish, a beautiful and primitive creature that can weight upwards of 300 lbs. Here it is shown cavorting, its form echoing that of the Gulf of Mexico. The pungency of the blue in the works in this series has to be seen. It is a contemplative, absorbing hue, sometimes more mottled than others


There's a lot of talk about the spiral form in this series, and as we'll see, it plays a prominent part, but here is a helix. Its form is analogous to the current in the Gulf of Mexico, where it is depicted here, which is circular. This was what led me to think about Time in this exhibit. The helix describes the motion of the current over time. Here we also see some topographical mapping, and how the current exits, rounding the tip of Florida. Most people became aware of this current during the BP oil spill, as a potential predictor  of where the black goo might go.

On the right is "Structure", which is a painting of a former installation in wood, titled "Place in The Woods". Again, superimposed on the Gulf. Note the church-like look of the cantilevered-triangular structure.


In "Serpent", we find the spiral. What is different from the helix to the spiral? Note that here the spiral is 2D. It is a widening gyre, with a beginning and an end. This makes me also think about Time, but in a very different way than the helix, which, unlike the spiral, repeats. Cyclical vs Linear/Historical Time. This motif began with a garter snake that Stackhouse found shedding its skin. Here it has graduated to more mythical "Serpent" status.


In this installation, we see the spiral in its most emphatic form, a wooden structure that reaches almost to the ceiling. As another critic noted, it is big enough to walk through, but I do not advise it, since there are enough supports in the way to trip or bang into. Do, however, walk slowly 360 degrees around it. The spiral widens heavenwards and has its point on the ground.

On the left, we find, again, the Gulf, with a series of sinuous lines over it and some of the surrounding land mass. The artists revealed that these are all the currents of the world in superposition, and superimposed on the Gulf. So is this merely a fetishized oceanographic fascination? No. These paintings, installations and prints are also about them, and their relationship and experiences. 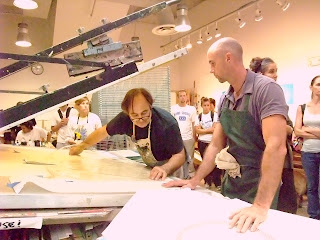 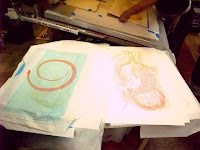 On the left we see a picture of Carl Cowden, Master Printer at Studio-f, and Michael Massaro intensely at work, making prints the evening before the exhibit's opening day. The precision the process demands is exacting, but room can be made for a little randomness to enter, and in this case, that was done expertly. 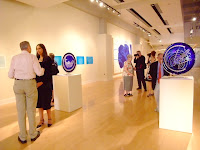 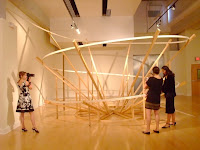 Opening night was well-attended. There were many creatives and collectors there. I ran into photographers Mike Conway, and Suzanne Williamson and artist Rebecca Skelton. 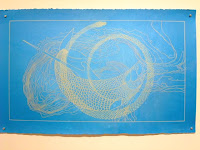 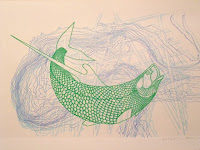 Some examples of the prints from Studio-f on exhibit. As you can see, there were many variants produced. 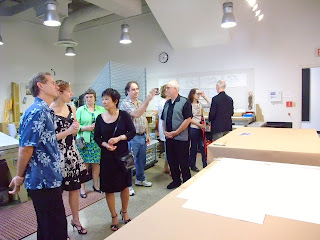 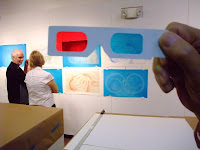 Gallery goers poured into Studio-f to look at the additional prints on display.

Some enterprising soul discovered some unintended 3D effects and the glasses were provided. 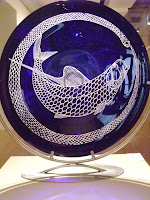 Mickett & Stackhouse also collaborated with Master Glass artist and no stranger to these pages, Duncan McClellan in making two large blue glass disks. On the right, we find the Tarpon and the Serpent, who now has shed the spiral, and connected with itself, back in circular time. He is a familiar mythological figure known as the Ouroboros [Link] 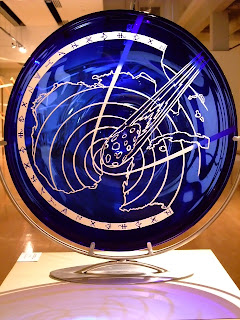 Here, in another McClellan collaboration glass disk, the circle with the alhemical glass-making symbols around it broken by the asteroid that killed the dinosaurs entering the frame, complete with shockwave, heading for Yucatan.

See it at Scarfone/Hartley Gallery in the R.K. Bailey Studio Building, University of Tampa, 310 N. Boulevard. Free parking for visitors just a block north in the parking garage only. Continues through July 15th.
Posted by Luis at 6:19 AM