We've all done it and thought nothing of it: Looked through a rainy windshield or window as other cars went by in traffic. Patrick Glover has explored this quotidian phenomenon in the series of paintings being shown at Mindy Solomon's Gallery in the current "Blurred Vision" show. Patrick photographs while driving in the rain, later editing and processing the pictures into the few that he elects to paint from. The rain renders the imagery into forms so dynamic that they resist being frozen in time. The familiar landscape is transformed into sinuous versions of its fair weather self. In the book "The Power of Limits", Gyorgy Doczi delves into the nature of form. He has a seemingly simple quote in it: "Without limits there is no form, and without form, there are no limits.". The limits in Glover's paintings are aqueous, and in our heads, momentary. Forms are distorted in a very seemingly organic way, yet they retain their identity. This ambiguity/relationship is at the core of this work.


One can see Glover modulating this relationship to greater, as seen here on the right, and lesser degrees. In some of the work, it is not easy for the viewer to make out what the real-life scene/object depicted was. At the show's opening, I watched several people visually scrutinizing "Oncoming 2, 2009". It was only when they moved back a little that they figured it out. That's fun and a natural thing to do, but there's more to the work. Glover told me that he's very interested in perception and cognition and that some viewers have reported seeing/projecting figures and faces in the more abstracted areas, though he assured me there aren't any.

There's a sense of the ephemeral in these images. Many of the things we think of as concrete (literally and figuratively) and solid are mercurial here, and by inference, the people in the cars and trucks, too. In this series, it is always raining, sometimes torrentially. The skies are stormy. The point-of-view is from the driver's seat. We are on the road, en route to somewhere, and coming from somewhere. Eventually we have to find our way home.


Each raindrop becomes a short-lived lens, reshaping the familiar into something new and mysterious. The momentary, unpredictable nature of the raindrops also introduces randomness and spontaneity into these paintings. The overcast skies only let through the higher energy forms of light through, meaning a lot of ultra-violet, which is why the colors, in spite of the greenish tint of safety glass used in car windshields and windows have such pungent, black-light-like hues. Glover's former work as a decorative painter and illustrator leaks through a little here and there in the work shown. 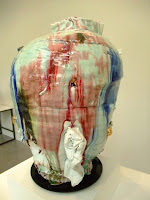 Also in this show are clay works by Gareth Mason. The one on the left is a porcelain and stoneware work titled "Veiled/Unveiled, Strata Series". Mason seems to be deconstructing the classic pottery form (the roundness derived from the wheel) via various means. There are dents, holes, cuts, and other clay forms that seem to penetrate or emerge from the surface. In doing this, Mason is questioning the signifiers that denote a piece as "pottery". He deconstructs the form, but does not go too far. These are still truly beautiful objects in the decorative sense.

Mason takes very calculated risks with these works. Here we see what seems like the rawness of clay, looking like mud, partially covering a beautifully glazed porcelain, mineral crust and stoneware piece.


In "Moths" on the right, there are dents, tears, a very asymmetrical neck, and gold objects protruding from the surface. These works are playing the edge, and playing it somewhat safe as well. They're a departure from the norm, but still adhere to many of its signifiers. 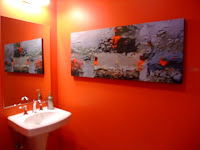 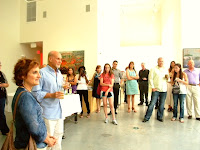 
Congratulations to Mindy Solomon and her crew, to Patrick Glover and Gareth Mason for a wonderful show.